What the Fukushima is Going on? 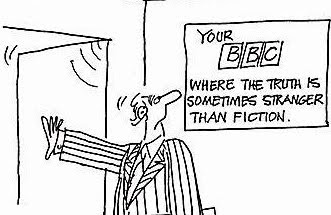 Well how could we possibly know? The major consequence of the Fukushima disaster in this household is that we now have a dish aerial so that we are no longer reliant on the BBC's coverage which, in this case, I can only designate as propaganda. The truth is beginning to emerge from Tepco, who are now admitting that three of the Fukushima plant's reactors melted down within days of the tusnami. Those presumably were the days during which the BBC was engaging a range of pro-nuclear stooges to reassure us that there was no problem.

While the internet appears to be ephemeral it can in reality provide a trace, and we can use this trace to assess exactly what we were being told by the BBC. On 14 March BBC churnalists were reporting the view of 'international nuclear watchdogs' (presumably the IAEA) that there was no sign of a meltdown, balanced by the comment of an unnamed minister that the 'melting of rods' was 'highly likely'. On 27 March the BBC reported that workers were 'trying to cool the reactor core to avoid a meltdown' at a time when we now know that three meltdowns had already occurred. Perhaps strangest of all was the constant repetition of the bizarre phrase 'partial meltdown', as though nuclear fuel could somehow resemble a chocolate fondant pudding.

We were, throughout the early days of the disaster, when people were still listening to the stories, being reassured that this was an old plant whose design is no longer used. This is, as made clear in a film made for the BBC by Adam Curtis back in 1992, when it still had a degree of independence, to entirely miss the point. The real question is why these plants were still running if they were not safe: and that is a question about politics not science.

The BBC's inability to provide clear information about the nuclear threat is no doubt a consequence of the increasing political pressure it has been under in recent years, making the inference that we no longer have an independent national broadcasting channel a sad but inevitable one. No wonder, then, that there has not been a reaction against nuclear power in Britain, compared to Germany, where the tide of revulsion from a better informed public has led to the closure of the entire nuclear industry by 2022 and the election of green governments in a number of the country's regions. Tweet
Posted by Molly at 08:25