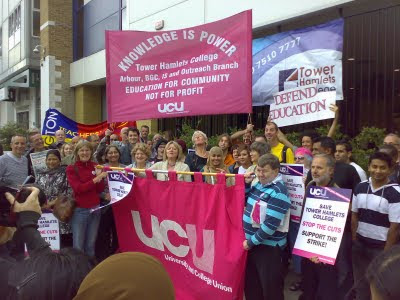 The Tory rhetoric over today's strike is a clear attempt to divide and conquer. We are told that the poor downtrodden taxpayer is subsidising the fat cats of the public sector, and that private-sector pension schemes are poor and the public-sector schemes should be as poor. No attempt is made to argue that private companies should provide properly for their employees' retirement. We are to be set against each other, workers in private or public sector, taxpayers and public sectors workers, when it is quite apparent that most of us fall into more than one of these categories at once.

I am proud to be striking today. I am proud to be defending the right of myself and my colleagues to contribute a reasonable amount to dignity in old age, should we be lucky enough to get there. I was pleased to receive the instruction to strike from my rep., together with the helpful information that 'UCU believes the proposals are not only unfair, but totally unnecessary. The TPS was renegotiated in 2007 to make it affordable and sustainable over time. There is no crisis or deficit in the scheme. This is nothing more than an ideologically motivated attack by a government that wants us to pay for an economic crisis we did not create.'

The changes to pension contributions, which represents an increase of some 50% or about £150 per month, are actually a tax specifically on the public sector, the government's target of choice, to extract money to pay for the deficit caused by the banking crisis. Since our future pensions will be politically controlled there is no limit on the number of times the government can come back to us for more money, or how many times they can reduce our consitions, our pay, or our future pensions. No limit, that is, except our unified political resistance.

In The Great Transformation Karl Polanyi gives an interesting new perspective on the strike. If labour is to be distributed in a market, he argues, then the seller, i.e. the worker, has a perfect right not to sell until his price is reached. It is the absurdity of considering labour a commodity like any other that causes the strike to appear anomalous. Here is his lucid prose from p. 239:

'Actually, strikes in vital services and public utilities held the citizens to ransom while involving them in the libyrinthine problem of the true functions of a labor market. Labor is supposed to find its price on the market, and other price than that so established being uneconomical. As long as labor lives up to this responsibility, it will behave as an element in the supply of that which it is, the commodity "labor", and will refuse to sell below the price which the buyer can still afford to pay.

Consistently followed up, this means that the chief obligation of labor is to be almost continually on strike. . . The source of the incongruity of the theory and practice is, of course, that labor is not really a commodity, and that if labor was withheld merely in order to ascertain its exact price society would very soon dissolve for lack of sustenance. It is remarkable that this consideration is very rarely, if ever, mentioned in the discussion of the strike issue on the part of liberal economists.'
. Tweet
Posted by Molly at 17:34