If Ireland Represents a Success then the Model is Broken

Whatever your position on the Eurozone crisis it is an important day for Ireland. Today the country returns to being a democratic sovereign state after three years during which power was held by unaccountable technocrats working in the interests of global finance. The fact that Ireland can once again borrow in the finance markets is being heralded as a success for austerity, but that rather depends on your perspective. 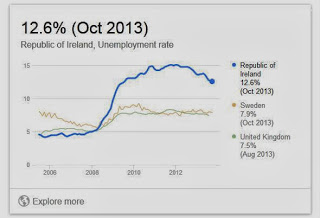 If Ireland's problem was that it had borrowed excessively then this has certainly not been solved. The country's debt represents 124% of its GDP, meaning that its people are working harder to pay money to absent shareholders of foreign banks. The unemployment rate of 13.5% (see the graphic, left) is an artificially low figure because of the high rate of outward migration, a process that threatens the country's future by removing the most talented young people. Meanwhile cuts in a range of social benefits and government programmes will deepen and continue.

We should also be questioning how Ireland found itself holding unpayable debts: what is its story as one victim of the msiguided Eurozone project. Because the single currency area required a uniform interest rate for countries in vastly different economic situations it was bound to destabilise particularly the smaller economies. In Ireland's case the low Euro interest rates provoked an absurdly euphoric boom in construction. The later bailout of the corrupt and disreputable Anglo-Irish Bank at a cost of  €440bn was the final straw for the Irish economy, which became effectively bankrupt.

Ireland's political establishment chose to repay the country's debts and to win the favour of financial elites, rejecting routes such as default, deflation, or the repudiation of the debts as odious. This decision has come at a truly hideous price for the people of Ireland. At the time of Ireland's latest budget in September, the EU troika that was then effectively running the country required Joan Burton, minister for social protection, to cut €440m or just over 2% from the 2014 budget. Seamus Coffey of University College Cork points out the impact that the debt restructuring will have on future generations as 'excluding interest costs and sovereign bank support, the total deficit in the six-year period 2008-2013, will put debt of nearly €60bn more on us in services and transfers than is [collected] from us in taxes and charges.'

The European authorities have decided to allow Ireland to keep its extremely low corporate tax rate, allowing it to generate cash to pay to its creditors. This means that we, as Ireland's economic neighbour, are also suffering as a result of the deal. US corporations, particularly those in the high-tech sector including Apple and Google, set up in Ireland where they are only required to pay 12.5% tax rather than in the UK. This also justifies George Osborne's decision to cut corporate tax rates here on the basis of the need for us to be competitive. While Ireland's time with the bailout programme has turned it into a beggar its route out of the crisis is also beggaring its neighbour.

This sort of competition between countries should be cooperating for mutual benefit is an inevitable consequence of globalisation. It is the very system itself, with the free movement of capital and lax regulation of corporate activity, that is enabling capitalists and particularly financiers to benefit at the expense of the citizens of the world.
. Tweet
Posted by Molly at 08:21 0 comments

Bursting the Bubble of Carbon Finance

The idea of a carbon bubble first came to my attention when I was researching a submission to the Environmental Audit Committee's Inquiry into Green Finance on behalf of the Green House thinktank. Anmongst other questions they asked:

'How effective are the financial markets in matching available finance to the required investment in renewable energy and other green projects? To what extent is a potential “carbon bubble” a real risk?'

They referred those providing evidence to a page from the seemingly well funded Carbon Tracker project which seeks to quantify the over-valuation of what they refer to as 'stranded assets'. The project seeks to put a value on the carbon-related assets that cannot be realised if we seriously address the issue of climate change. Once we introduce rigorous carbon limits the fuel their value relies on becomes unburnable and therefore the value is lost. Carbon Tracker reports frighteningly large numbers of potentially stranded assets: they take a value of $4trillion in 2012 that is used servicing $1.27trillion in outstanding corporate debt.

The frightening way of framing of this discussion is that once the over-valuation is recognised it could precipitats another collapse in financial markets and another financial crisis. This always seemed to me hugely naive suggesting that the rich and powerful who control these assets would permit political decisions on climate change to destroy their value. It was in this vein that I responded to the EAC inquiry:
'The idea of a "carbon bubble" assumes that legislation passed in the wake of concern about climate change to limit carbon dioxide emissions is more powerful than the political influence of fossil-fuel companies. While we would like to believe that this is the case we suggest that it is a rather naive position. Is it not more likely that, if energy companies find themselves with quantities of fuel that cannot be burned within existing carbon limits, they lobby to have those limits changed rather than allowing their investments to be diminished? We suggest that the EAC is in a strong position to generate evidence on this to prepare for such lobbying.'

Then I simply forgot about the debate. What brought it to my attention again was the machinations of self publicist MP Jacob Rees-Mogg and the internal Tory party debates about green crap and green levies. As I blogged earlier, it seems fairly apparent that the concern of Tory grandees is for their own assets and not shivering pensioners. Here we see the playing out of the political end-game of climate change. The post-fossil world is one of community-owned energy and economic liberation, so there is no surprise that climate change is a battle based in political economy rather than science.

The discussion about the carbon bubble issue has become a dialogue of the deaf between holders of carbon-related assets and those who are fearful about The Financial Crisis round II. How refreshing it was, therefore, to be at the Compass Youth meeting on this issue at Portcullis House last week. Although the meeting itself was advertised in a fairly scary way, through debating the issue we discovered that in reality we may not be facing a catastrophic economic collapse but an orderly transition to a post-fossil future matched by a gradual reduction in the value of carbon-related assets.

In a strange way it is even encouraging that Bloomberg recently launched their carbon risk valuation tool. Investors and those who serve them seem unconvinced by the Tories' dinosaur protection plans and appear to see the wind is blowing in the direction of renewables. And we can all play our part here by encouraging those who hold our assets, whether our pension funds, universities, or local authorities, to divest from carbon assets just as they have or should have divested from assets relating to tobacco, alcohol and arms.

Smile: It's a Co-operative Bank 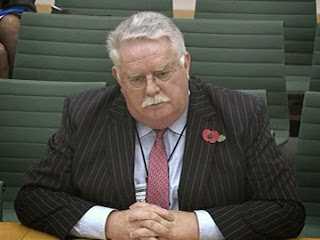 It's been a challenging few weeks for those of us who hold an ideology to the left of the political spectrum. I don't know whether I was more astonished to discover that the road to serfdom goes via the Brixton Maoist Centre or that my apparently ethical bank was actually being run by the 'crystal methodist'. I'm only waiting to discover that Shelley was an incestuous just peadophile for my despair to be complete.

I would hazard a guess that you shared my frustration after the financial crisis to hear from many economists and their media supporters that the answer to the disaster was not fewer markets but more markets. So I hope you will forgive me if I will paraphrase this response and argue that the answer to the crisis in the co-operative sector is more mutualism not less.

As an earlier guest post on this blog demonstrates the bank was following its market competitors by engaging in a whole range of activities that I feel its customers and members would never have sanctions have they been offered a choice. The contrast between the activity of the Co-operative Bank and the Nationwide Building Society, a large but none the less mutual organisation, is instructive. The Nationwide, a genuine mutual which has more than doubled its 'profits' this year, is anxious that it is not tarnished by the problems at the non-co-op Co-operative Bank.

For me the principles of co-operation are not challenged by the antics of Mr Flowers. Businesses run by the members for the benefit of the members and that do not deliver services to external shareholders are still the ideal form of economic organisation in my book. I have an account with the Co-operative Bank because it was part of the movement that subscribes to these values; I was always disappointed that it was not a genuine cooperative.

The problems for the co-operative movement is that it appears to have lost it sense of purpose and its ethical stance is now under challenge. To save its reputation it needs to divorce itself from those who would influence it, whether market players or Labour Party insiders. We need the cooperative to become truly ours. It is our job to wrest control back from those who would use it in their sectional interest and to make it the truly mutual business sector it has always promised to be.
. Tweet
Posted by Molly at 13:43 2 comments