US Monetary Selfishness is Devastating for 'RoW' 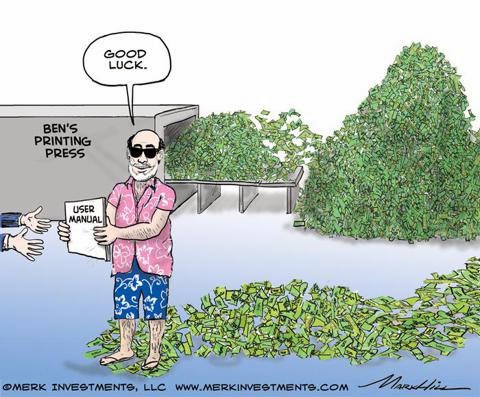 Remember the World Series? The naming of this League has always struck me as an interesting insight into how the US sees the rest of the world. In reality only US teams play in the league, implying that the US is the world. Their economic and monetary policy has always adopted a similar worldview.

The phrase 'the world is your oyster' has really described the approach the US has been able to take to global markets since the agreement at Bretton Woods in 1944 that dollars would become the fundamental backstop of all global value. This role used to be played by gold, which we all had a fighting chance of digging out of othe ground and so had some degree of neutrality. Since 1944 it has been paper money, under the control of the US bank the Federal Reserve.

The agreement also stated that the US had to hold enough gold in Fort Knox to back the dollars it issued. But Nixon unilaterally abandoned that agreement in 1971 and since then the US has been able to create money at whim, and import goods from the world in exchange. This extraordinary and deeply unfair situation has funded excessive consumption and an impossible deficit at home, and left foreign countries - particularly China - holding vast quantities of US debt.

Since the 2008 crisis, the US has used this unfair avantage to pour money into its economy to prevent it suffering the sorts of recessions we have seen in Europe - around $85bn. per month have been shovelled out through buying treasury bills back from financial institutions, in other words a massive amount of value being created and given to banks. Now the US has decided recovery is sufficiently secure to reduce or 'taper' this policy, but the financial institutions are objecting and the stock market has fallen radically as a consequence.

But the consequences of such an interest-rate rise in the US are small beer compared to the devastating consequence of this policy to other economies across the world. US monetary selfishness has led to a financial collapse in Argentina and devaluation of currencies in Brazil and Turkey as the US, in the words of the Brazilian central bank governer, hoovers out of 'emerging markets' the money it is no longer injecting into its markets at home. Decades of openness in global finance, forced on the world's economies by the IMF, have left them completely vulnerable to this US policy, as there are no controls on capital movement and they cannot now establish barriers.