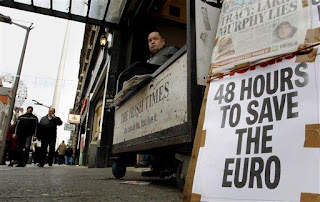 The Irish State faces a historical moment. In keeping with its tradition of courageous struggle for freedom and justice and the unique role that Irish people and culture have played on the world stage, Ireland can now be the country that stands up against the bullying forces of the financial markets. The morally unacceptable terms it is being offered mean that any other response is unthinkable.

The bond traders responded to Merkel's attempt to constrain their profiteering by downgrading Irish debt - thus raising the income they gain from it - increasing the costs imposed on the Irish state, and crucifying the Irish people. It is time for a proud nation to say no: default is better than humiliation.

Such a strategy will also turn the tide. Since the break-up of the euro nwo appears inevitable Ireland could be a player in the end-game, rather than a victim. The plan of the financial interests is to pick off one Euro country after another. This is similar to the financial contagion that began in South-East Asia in the 1990s, but with the added appeal that, as each country falls, Germany will pay off the traders. Ireland's default would signal the end of this process and force a political solution on the Eurozone. If Ireland does nothing Germany will come under increasing pressure itself to abandon the euro and create a new currency, leaving the smaller nations of Europe in turmoil.

And here is one I prepared earlier. All EU states should simultaneously suspend trading in their national debt. They should then agree interest rates that they are prepared to pay on their national bonds over a 10-year period. These rates would vary to reflect the nature of the economies involved, but only within narrow bands, and at much lower rates than are being paid today. New dated bonds with fixed returns would be issued up to a percentage of current holdings.

States would thus retake the power over their national economies. Traders could accept the terms or lose everything. Their game of extorting the value of national economies through pressurising their politicians would be finished.

This radical political move would clearly have serious implications for the other global currencies, and especially the dollar. But it would bring the interests of citizens back into play and increase the pressure for urgent negotiations to establish a new global financial architecture which serves people rather than financial interests.
. Tweet
Posted by Molly at 08:13