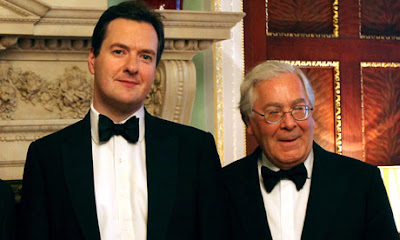 The loudest call for reform following the failure of the banking system in 2008 was that the risky activities undertaken by investment banks should not, in future, be able to threaten the deposits of ordinary working people. Osborne's speech at the Mansion House last night indicated that he is not going to separate these two very different aspects of UK banking activity.

The newspapers this morning draw attention to the proposal, adopted by the far-from-independent banking commission, to 'ring-fence' the savings and deposit side of banking from the global casino. Like the stock-market itself, this tired metaphor is drawn from the agricultural sector. But the beasts of the City are far more powerful than the politician's fence. Admissions that negotiations are still ongoing makes it clear who will decide the outcome. Needless to say, the citizens who have paid for the banking fiasco are not represented in these discussions.

If retail banking remains within the same company structure as its more glamorous, more profitable and more powerful investment-banking sibling, the efforts of all the most creative and Machiavellian minds within each global conglomerate will surely be bent towards finding ways through the barrier. Only a clear separation into separate companies, with separate boards pursuing different agendas can remove the threat of another crisis in future. The banks will refuse to settle until they have made this clear separation impossible, until they are sure that the ring fence is full of holes.

But this whole discussion addresses only half of the problem. Even if your own savings are safe, if the massive investment banks run into problems as a result of their absurd and irresponsible activity then, while they are large enough to provoke a systemic crisis, the risk that we will all have to carry the costs and take over their debts onto the public balance-sheet will remain. Another policy proposals is, if anything, even more important than the separation of retail and venture banking: to limit the overall share of the market held by any individual institution.

I would anticipate that most readers of this blog keep their own money far away from the commercial banking system, in a mutual organisation such as a building society or with the Co-operative Bank. However, we are still vulnerable to the threat that the uberbanks make to the credit system on which our national economy depends. Never was there a clearer example of when finding your own small-scale solution is not enough: we must rather find a way of turning public anger into a significant political challenge to the banking sector.
. Tweet
Posted by Molly at 07:58