A Politics for the Earth

Today is the day that Vince Cable launches the next salvo in the battle between capital and labour. This is the battle that has been central to our politics for the past 200 years or so, since the industrial revolution finally broke people's ability to create a livelihood by use of their own labour and on their own land. Interestingly, this is the word, a very green word, used by the TUC in their assessment of how the labour side is doing in this battle.

The TUC report shows that labour has been losing for several decades with headlines such as: 'The wages of middle income Britain grew by an average of just 56 per cent between 1978 and 2008, despite GDP increasing by 108 per cent over the same period, and for workers in some skilled trades incomes actually fell in real terms.' This is clear evidence that the consequence of globalisation and the neoliberal revolution in economic organisation has been the extraction of an increasing share of value by the interests of capital, and at the direct expense of labour.

The report frames the discussion against the background of a dichtomy between a welfare model of the economy and a model of finance capitalism. It argues that the consequence of a move towards a reliance on finance resulted in no extra jobs to replace those lost due to the movement of manufacturing overseas: 'Finance and banking created almost no net jobs in the 15 years to 2007, despite the industry’s greatly expanded share of the nation’s output and profits.' 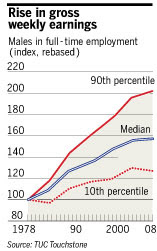 In its proposals the report offers the beginnings of a revival of vision on the left, a vision which includes demanding that politicians pay more attention to equality and investment in manufacturing, reopen the question of the selfish and destructive design of the corporate business model, and of course the inevitable demand for more union involvement in economic policy-making. The report also provides the sort of information about who is gaining from the neoliberal model - the wealthy and the professionals - that has been so lacking in the debate about economic policy in recent years.

The most killing statistics of all are those that show that the economy has not thrived under this neoliberal model. Growth has been slower and recessions deeper. Even on its own terms the capitalist economy has utterly failed, and the most extreme version of it, with all the social costs attached, has failed most extremely.

The weakness of the report is that, in spite of using the word livelihood, the word is used in the predictable narrow sense that a 'labour' movement seems incapable of transcending. Hence the emphasis is still on the fight between owners and earners, while the object of that fight, the source of all true value which is the earth itself, is still left outside the debate.
. Tweet
Posted by Molly at 08:01