I Sat Down and Wept 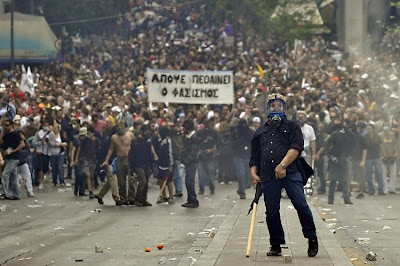 The parallel being drawn between the failure of Lehman Brothers and the potential default of a sovereign nation makes clear the blurred nature of democratic and corporate accountability in the world of 21st century capitalism. Rating agencies are at liberty to value national and corporate debt by the same measures. This is not only irrational but also a deeply political play, since the democratic right of the people of any nation to reject the debt that the banks have loaded onto them has been marginalised.

Fortunately, in the country whose language the word democracy arises from, the people have not given up their democratic rights so easily. Their continued and increasingly violent presence in the streets is the visible exercise of the political reality that makes a nation an entirely different beast from a corporation. Shareholders and board members hold power through the exercise of property laws; politicians only hold power by the will of the people.

Our refusal to allow Lehman and Greece to be compared as though they were equivalent should remain our own commitment to a democratic future in which our rights to have power remain intact. But we need to match this with a demand for our politicians to exercise the power that we have delegated to them as our representatives.

The most infuriating aspect of the Lehman-Greece link is that in the nearly three years between the first default and the second, our politicians have apparently done nothing to restructure the global financial system or to gain a political handle over the banking system. By some combination of corruption, co-optation and lack of courage, the breathing space that was bought by the bailout of banks has not been used to ensure the future stability of the system, never mind its equity.

It was a long time from 1929 to 2008 – several generations in which memories of the previous disasters of capitalist finance faded - but there was really no excuse for policy-makers to remain ignorant of, to literally ignore, the obvious weakness and injustice of the liberal finance system their political retreat had allowed to flourish. Acting in our interests it was their duty to return to a form of global settlement like that reached at Bretton Woods, but with equity and sustainability as two additional guiding principles. Their failure to do so, their pusillanimous determination to allow the market mayhem to continue ruining human lives and planetary systems is a shocking abnegation of responsibility.

As viewed daily in Greece, as in Iceland, as soon to be seen in Ireland, Portugal and Spain, when politicians fail their people so disastrously economic instability rapidly becomes political instability. Few of those alive and voting today remember serious political instability, although it is less than 40 years since the three Mediterranean countries mentioned were all ruled by military dictators. There is so much more at stake here than the investments of finance companies and it is politicians with the vision to grasp that who are so seriously, and tragically, lacking.
. Tweet
Posted by Molly at 15:11