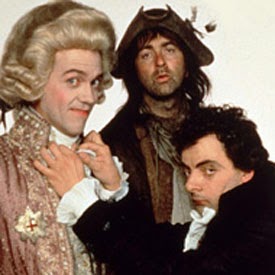 I am wondering whether I can persuade the cast of Blackadder to assemble for one last hurrah. The plot will revolve around the growth of greed in Regency England. It can make refer askance to the South Sea Bubble. The century is entirely wrong but who will care?

Blackadder has become caught up in speculative frenzy. Being immoral but not irrational he is not a very successful trader. He either cannot understand or cannot accept that liabilities are actually assets and this weakens his ability to trade effectively. Baldrick, by contrast, is making money hand over fist trading turnips, night soil, the future value of Prince George's sock collection, and so on.

Cut to Mrs Miggins's pie shop which is abuzz with talk of the positions her customers are taking. Everybody has abandoned their trade in favour of speculation. Suddenly Shelley, in his big girl's blouse, leaps onto the table to decry the 'irrefragable injustice' of the national debt. He is pelted with old pie crusts.

Conversation moves to gossip about new schemes, with a crescendo of excitement around the potential of investments in a mosquito-infested swamp in South America. Shares are increasing rapidly in value. Baldrick has abandoned his current investments to put all his money into this new colony. Nobody is sure who is behind the scheme but nobody can afford to be left behind. Eventually, Blackadder persuades Prince George to trade the national debt for a share of the swampy settlement.

The inevitable happens and the mosquito coast is revealed to be worthless and everybody loses their shirt, including all the Romantic poets who had not been able to resist a flutter. Baldrick is philosophical about his losses, since he is left with more turnips than he knows what to do with. Prince George has transferred his debts to his subjects and still has plenty of socks. Blackadder is revealed as the eminence grise behind the scheme but can no longer be found in London.

The point of the plot is not complex but then neither is the fraud we have all been subject to. What can we propose in terms of a happy ending? Baldrick sets up his own currency based on root vegetables? The people storm the Bank of England to demand direct money creation? Blackadder is tired for treason and his flat in Cheyne Walk is confiscated? Sadly, this is the point where Prince George wakes up and realises is was all a dream.
.
Tweet
Posted by Molly at 12:52 1 comments