I have become increasingly saddened in recent weeks to see how those of us who first conceptualised the 'green economy' have been allowing that phrase to be co-opted by the forces of capital and by those who would seek to use it to swell the size of their profits. I am now reading critiques of the green economy from the left which lead me to ask, if not a green economy, then what? Surely our strategy should rather be to reclaim the green economy.

An example is a recent report from the Rosa Luxemburg Foundation called Beautiful Green World: on the Myths of a Green Economy. In the following sentence it abandons the attempt to ensure that the green economy will be founded on social justice rather than the maximisation of profit:

I could not disagree more and I think it is a disastrous idea to concede this turf to the capitalists. 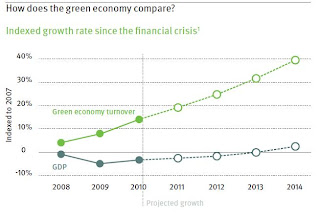 The sort of argument critiqued by Rosa Luxemburg is to be found in a report from the Green Alliance: Green Economy: A UK Success Story. This attempts to argue for investment in the green economy to save the economy from recession and stimulate growth. It grows out of exactly the same competitive, growth-driven mentality that has created the ecological crisis. The message to policy-makers is that Britain can compete most effectively and make the most profits from prioritising the green economy. While it is immensely encouraging to see how the green sectors are flourishing in the midst of recession, this framing is not helpful.

It is a fine line between calling for investment in better-insulated homes and rail networks while rejecting the idea of green growth, but I find the concept of transitional investment helpful here. If money (and energy) invested now can ensure that we will be able to enjoy a good life with a lower investment of energy in the future then it can be justified. Just as we have had to hold onto the meaning of sustainability, as it has been disfigured into 'sustainable development' and even emptied of meaning other than something that lasts for a year or two, so we should not abandon the use of the phrase 'green economy' while rejecting any association with oxymorons such as 'green growth'.
. Tweet
Posted by Molly at 07:50