The Bioregional Economy: A Constructive Response to Climate Change 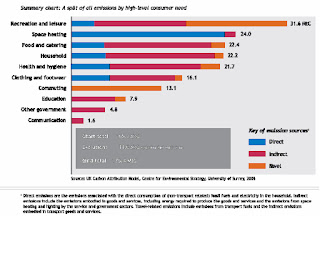 What can you do?

As part of the Green Party’s submission to the Stern Review I wrote that ‘the globalised capitalist economy is inherently unsustainable because it is based on turning energy into money without regard for ecology. Climate change is just the first and most urgent piece of evidence that this is the case.’ OK, this is rather trite and simplistic, and says nothing of the vast proportion of capitalism (around 97%) that generates profits by speculating on the future values of currencies or commodities, but as a slogan it has much to recommend it.
In the sustainable economy energy will the important measure rather than money. In fact these two can be joined through the creation of a currency backed by carbon, as first suggested by Richard Douthwaite. Scarcity is one of the key requirements of a successful form of money (hence the use of gold or cows in other societies at other times) and now our most valuable scarce resource is the global atmosphere.
The poverty of the South can be explained in terms of their inadequate consumption of the global economy’s energy; the over-consumption of the rich, developed countries can be explained in the same way. The shares of carbon dioxide of poor countries do not match their shares of world population. The comparison of India and the USA is the most striking: a direct swap of carbon dioxide would resolve around a fifth of the inequality at a stroke. India is responsible for 5% of the global output of CO2 but has nearly 20% of the world’s population; the USA, by contrast, is responsible for 25% of emissions but with only 5% of world population.
The IPCC (Intergovernmental Panel on Climate Change is a UN panel of experts who have exhaustively analysed available data about the consequences of carbon dioxide emissions to estimate the ‘carrying capacity’ of the planet, that is how much CO2 it is reasonably safe for us to emit. The Global Commons Institute (GCI) in London has developed a model for sharing this total amount fairly between the world’s people on a per capita basis, and then for reducing this amount rapidly over time, called Contraction and Convergence (C&C). If we work with the year 2000 the sums work out rather neatly, since the model suggests around 6 billion tonnes of carbon can be produced, and the planet had around 6 billion people, which allows us 1 tonne each. At present in the UK we produce around 2.5 tonnes, which gives a clear idea of the size of cuts required just to reach fair shares today, even before the cuts that are necessary.
A comparison of CO2 emissions by country shows how the poorer the country is the less of its share of carbon dioxide it is producing and the more it needs an input of energy from the richer nations. At present we measure economic energy in terms of money, usually dollars. In an economy that respected planetary limits we would measure activity in terms of energy, since this is the scarcest planetary resource. As green economists we need to move towards an economy which uses energy as both a way of measuring the economy and, ultimately, the basis for its means of exchange or money. Tweet
Posted by Molly at 08:45 0 comments