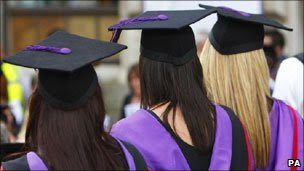 The hiatus in posts was caused by a brief trip to Cambridge to see my son graduate. The ceremony was typically bizarre in a way only Oxbridge can manage. The graduands were gowned and robed, but had little sense of what they were undergoing, since the ceremony took place in Latin. Much of this seemed entirely appropriate to a ceremony which is one of the few rites of passage that remains in our civic life and would have provided excellent subject material for an anthropological study.

More fun might be had designing the robes for the co-operative university, which has been under discussion here and elsewhere. The UK Society for Co-operative Studies held a session at Co-operative Congress last week as part of an ongoing debate about the need to establish a co-operative business school for the UK. The document produced there for discussion, and the report Co-operation in the Age of Google to which it in part responds, can be found on the Social Exchange Repository.

One aim of the Society is to take forward the debate about the structure of education: 'An educational programme, therefore, is not simply an opportunity to accredit what is already taking place. It is a mechanism by which those who have spent years on co-operative development activities can contribute their knowledge in a way that informs the development of higher education.'

In this regard there are interesting developments already underway in Lincoln's Social Science Centre, which is 'run as a ‘not-for-profit’ co-operative and managed on democratic, non-hierarchical principles with all students and staff having an equal involvement in how the Centre operates'. Staff donate their time for free, but such models could be developed as alternatives to the elite private universities that the government is encouraging.

Perhaps more important, though, is to build up our research knowledge about alternative economic models. So much of the existing neoclassical framework, from economies of scale to the concept of profit itself, have no meaning in the context of co-operative businesses. Until we can create our own concepts and coherent intellectual framework we are not equipped to replace the destructive and defunct capitalist paradigm with a new business model that we can teach with confidence in our universities.
. Tweet
Posted by Molly at 11:37