Where does money come from?

If you ask people where money comes from they will probably tell you from a bank. Dig deeper and you will find that people believe that the money they take out of the bank has been deposited there by somebody: by the person herself, in which case it is simply a withdrawal, or by somebody else, in which case it is a loan. This is the first big myth of money, because the truth is that all or nearly all (depending on your theorist of choice) the money you take from the bank has been created out of thin air by the bank itself.

When you begin teaching students about the economics of banking you teach a fiction known as ‘fractional reserve banking’ and many who have never taken economics as an academic discipline or worked in a bank have a hazy notion about this system. It is understood, because of Hollywood movies about ‘runs on the bank’,that the bank does not actually hold, or need to hold, as much money as it lends to people. Because it is highly unlikely that everybody will come and ask for all their money, all at the same time, the banks can consider themselves to be acting with probity if they retain only a proportion as ‘reserves’, this proportion being understood to be around 10 per cent. Let us for the time being take this story as a reasonable account of how banks create money; it is the one that is reproduced in most economics textbooks. The first stage is the deposit of some money by a punter, let us say £100. Because banks have learned from historical experience that only one in ten of such punters will want her or his money back at any given time, they feel quite secure in lending £900 on the basis of this deposit, effectively inflating its nominal value, and thus reducing its real value, tenfold.

The second myth about money that is universally believed is that it is, and needs to be, backed by something of real value. Governments create money and this money has credibility because the government has a sufficient store of gold in its vaults to support its value. Like the reserve banking story, according to this fiction governments can create more money than the gold they have, but only up to a certain limit. This story was true for some time, but it was found that the uncontrollable growth of the capitalist economy rapidly outstripped the gold available to support it and maintaining a ‘gold standard’ stifled economic growth.

Eagle-eyed and sharp-minded readers will have noticed that there is an inconsistency between the two stories told so far, in that they disagree about who is responsible for creating the money. They have in common the idea that, while there should be something of real value backing up a currency at least in part, who owns this collateral and who therefore creates the money could be either the bank or the government. This was how things were, both banks and government were entitled to create money: governments created money as fiat issues, whereas banks created it in return for a debt.

So there are several different types of money, distinguishable by the nature of their back-up and by who controls them. Banks can create money on the basis of deposits, as credit. Governments can create money by selling bonds, or just by making a decision to create currency. It may be efficient to leave the job of generating cre 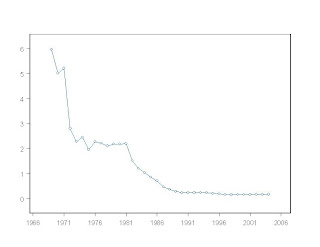 dit for economic activity to banks, so long as they operate within political controls, but it will also be necessary to have money created by government both as credit, to fund public works, and as currency, to facilitate economic activity without the creation of parallel debts. The graph shows how the political attitude to money since the Second World has effectively been the privatization of money creation. It shows the relative proportions of money created by banks and governments over that period. This has had the inevitable consequence of increasing the proportion of money paid to bank shareholders and producing a squeeze on the money available for public investment.
. . . to be continued (when you can bear it!)
If you can bear any more just now you might like to follow this link to a short presentation about money.
Tweet
Posted by Molly at 16:39