What is Going on at the Co-operative Bank?

The idea that the Co-operative Bank and the 47 remaining building societies represent a positive alternative to mainstream banking been most enthusiastically pushed recently by the Move Your Money organisation as well as by anti-capitalist activists, Greens and supporters of the alternative economy. So where are we following the furore surrounding the Bank's 'rescue plan'?
Yesterday (17 June 2013), the Co-operative bank announced its plans to meet the capital requirements of £1.5bn (non-specialists might prefer the Guardian summary). This follows a decision earlier in the year to abandon a bid to take over 631 branches from Lloyds Banking Group, dramatic downgrades by Fitch, S&P and Moodys, and a changing of the guard at the boards of both the Bank and the wider Co-operative Group.

Some people have started asking some pretty good questions about what went wrong at the Co-op: Ruth Sutherland comes up with a dozen and more recently Patrick Collinson put forward another eight.

The problems can be traced back to the takeover (announced in October 2008 and completed in August) of the Britannia Building Society, where the issues were: Before the merger with the Co-operative Bank, Britannia was the second largest Building Society in the country. Contrary to perceptions of building societies being safe, traditional, and guided by ethics and principles rather than profits and growth for their own sake, Britannia was following a business model not dissimilar to those of HBOS and Northern Rock: borrowing from the wholesale markets to fund asset growth, frequently via mispriced risky lending, with an increasing interest in (large) commercial property loans.

Perhaps the aspect of the Britannia’s business model that made it most vulnerable in the crisis was its high reliance on wholesale funding. In the UK, building societies face a regulation that means they must raise 50 per cent of their funding from individual retail depositors. Everything else (wholesale borrowing from the short-term money markets and longer-term capital/bond markets , combined with non-retail deposits from other organisations such as local authorities) counts towards the ‘Funding Limit’. Britannia had the highest funding limit ratio of any building society at year-end 2008, and in all but one of the previous five years (it was still the fifth highest in 2005). 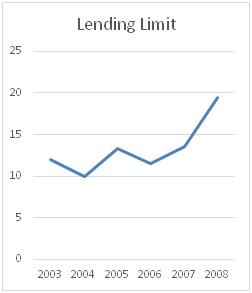 Just as they face regulation on liabilities side of the balance sheet, building societies are also limited in the kinds of assets they can hold: they must hold 75 per cent of commercial assets (liquid assets are excluded from this calculation) in the form of residential mortgages. Here too, Britannia was pushing the limit.

In 2008, the lending limit ratio was the highest for a UK building society. Though this was not true in previous years, the trend line is worrying: the Britannia was rapidly increasing the proportion of its lending not in the form of residential mortgages. A particular focus was commercial property, and rather than building up a portfolio of small, relatively safe loans to B&Bs and flats above shops, £900m of the £1.7 bn of ‘impaired’ loans is from just 12 big loans (Collinson, 2013: url, paragraph 1).

This is not to say Britannia were not also making lots of mortgage loans: in terms of mortgage lending as a percentage of prior year loans, Britannia were the 7th fastest growing building society 2007-2008. It appears that the decisions about who to lend to were not well made: 'Impared loans on a book of former Britannia mortgages known as 'Optimum' are running at 17 per cent--way above the industry average--with £1.2bn. of home loans at risk of going bad . . . Across the Co-op Bank’s whole mortgage book, 6 per cent of lending is classed as impaired. A further £1.1billion of loans are in ‘forbearance’, meaning borrowers in supposedly temporary straits have agreed a deal such as a payment holiday.' 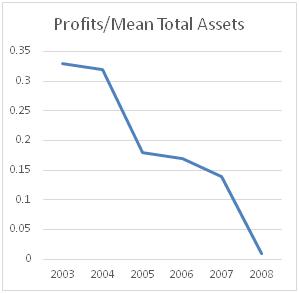 In hindsight, these graphs and statistics show that Britannia went into the crisis with pretty much the worst business model possible. It would perhaps be OK if there had been profit in this model, and it was all being put into capital in case of the eventuality that things didn’t turn out well. Unfortunately, as the next graph shows, even as it continued to lend more and more, and in areas theoretically more risky for a building society, Britannia was making less profit per pound of lending (in other words, mispricing risk on a grand scale). I cannot believe that these graphs were not considered as part of a due diligence process (but, if you read the PR from the time you might conclude otherwise).

According to my analysis there are three broad reasons why the merger took place:
As far as I’m concerned Option 1 amounts to hubristic foolishness, Option 2 amounts to naive optimism and Option 3 amounts to dangerously craven weakness. The Co-operative Bank was facing a capital shortfall of £1.5bn. I personally cannot see how selling off great chunks of your business (life and general insurance arms), ceasing lending to new business customers, and undermining your brand by introducing external shareholders to what had been considered a ‘mutual alternative’ are going to combine to create a business model that can ride out the problems that remain.

Just about the only shining light for the Co-operative Bank is that, thanks to a reputation for customer service and an ethical stance, it has in the words of Frances Coppola 'an amazing customer base which has been astonishingly loyal'. Some of the Co-operative Bank’s customer base will remain loyal. However, for new customers (of whom there were apparently as many as 100,000 last year) this loyalty will be very shallow. Anecdotally, such customers feel betrayed and are already leaving. Even old and traditionally loyal customers may reconsider their relationship with the Bank following the introduction of shareholders and the associated incentives to maximise short-term profits, not to mention the revelations of previous bad management. If I were a retail customer, I’d certainly be thinking twice. Perhaps more to the point, I’d wager that larger borrowers and investors aren’t feeling too positive about the Co-operative Bank at the moment, and that won’t help them one bit.

But this isn’t the bad news. The bad news is that the UK financial crisis of 2007-8 was not solved, but merely deferred (much like the crisis of the 1970s that lies at the root of our current problems). The problems at the Co-operative Bank are just the beginning. Your money is probably safe (assuming you haven’t got very much), but our financial and economic systems still very much are not. The storm that is coming is as likely to selectively avoid particular ownership models in finance as nature’s storms are to avoid houses on the basis of whether they are owned by the occupier, a landlord or the local authority.
.
Tweet
Posted by Molly at 09:41