However many cheers we decide to cheer in response to Australia's introduction of a carbon tax , it is an encouraging sign that a country dominated by mining and energy interests and one of the highest carbon polluters is introducing an unpopular policy. What about the UK? Should we be arguing for a carbon tax here? Interestingly, it appears that this discussion is already underway, although in strong contrast to the situation in Australia, it is happening between the government and business, with little or no public debate at all. It is also happening without any mention of the word tax, and yet it is hard to find any other interpretation of the consultation document about a 'carbon price floor' published this March. 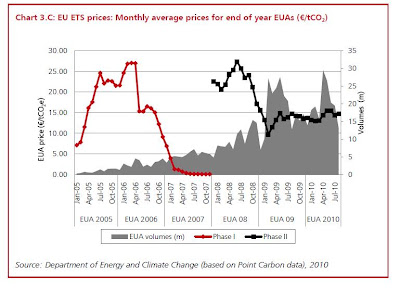 The first graphic illustrates the need for such a 'price floor'. It shows the price at which carbon was trading (bear with me on this nonsense) during the first phase of the EU's carbon trading scheme. The collapse in the price in 2007 resulted from the over-issue of a permits as a result of industry lobbying. There were more permits than companies needing to emit CO2, hence no scarcity, hence no price and the market failed.

The second graphic illustrates the government's proposal to use the Climate Change Levy to create a predictable upward trend in the 'price' of carbon to give a clear signal to industries reliant on fossil fuels that they had better increase their efficiency and/or shift their source of energy. This is a purely indicative graphic, with no suggested price, although later the document suggests 'Three illustrative carbon price scenarios for the UK power sector: £20, £30 and £40/tCO2 in 2020 rising to £70/tCO2 in 2030.' 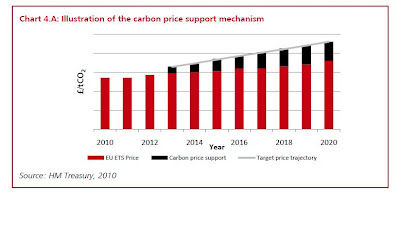 This is one of the major problems with carbon pricing as a solution to climate change: we have no idea what the price should be. Real solutions to the problem of excessive emissions begin with a scientifically determined cap, and then find some way of sharing out the emissions the cap implies. Trading leaves the field wide open for industrial emitters to lobby to increase the number of permits available, and hence fix the market price. We can see from the first graphic that the current carbon price in the EU system appears to be stabilising at around €15 per tonne. As one of my students recently pointed out, given that our individual carbon quotas are around one tonne per year, and our actual emissions are 2.5 times that, he could easily afford to pollute to his heart's content, even on a student income.
. Tweet
Posted by Molly at 17:51