It is rather ironic that the main question the media has drawn from the latest publication of Social Attitudes in Britain is whether we are more Thatcherite now than we were in the days of Thatcher. If we were we would certainly not have these data to mull over, since Thatcher was notoriously opposed to social research and abandoned the most valuable tool for the social researcher: the National Child Development Survey, as well as virtually eliminating sociology from our universities.

So having survived the Thatcherite axe the social researchers, though privatised, are still funded to tell us that we care less about each other than we used to and that we have utterly lost faith in our public institutions. While we did hear on the BBC about the fall in support for a government role in redistributing wealth we did not hear about the decline in trust for that institution itself: from 72% to 49%. The politicisation of the BBC has destroyed its role as a public-service broadcaster. The only public institution to have gained trust is the National Health Service. There are no data about the extent to which people's faith in statistics has been undermined by the privatisation of those who seek the data: NatCen (a company limited by guarantee) would have no interest in such a question and its results would not reach a high market value.

This sort of data is, as the Spanish say of history, a field in which all can make hay. I would be interested to see some socio-economic breakdown of the responses to the questions about welfare. It seems that those most vulnerable, including many dependent on benefits themselves, are some of the most vociferous in criticising the dependency culture. This represents another example of the cognitive dissonance that is a necessary skill to survive in late-capitalist Britain. 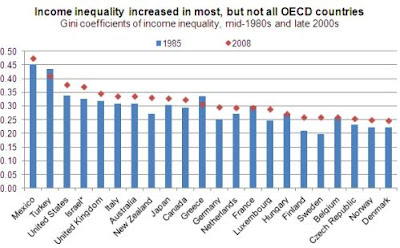 The media emphasis was on the declining levels of support for redistribution, which was matched by a growing sense of injustice about the unequal way in which hard work is rewarded. This chimes with the findings of another report released this week, by the OECD. Called Divided we Stand it rang alarm bells about the negative social consequences of rising rates of inequality withing societies. Hardly the message one might have expected from the club of the world's richest nations and a traditional cheer-leader for globalisation.

Angel Gurría, OECD secretary-general, is quoted as saying that 'the social contract is unravelling', and this seems to be reflected in the responses to the Social Attitudes Survey as well. The interesting question is why the OECD should suddenly have become interested in the social impact of growing inequality. The real struggle is between the greedy and thoughtless elites and those who realise that capitalism has always relied on the consent of the masses and that without a social contract that consent cannot be guaranteed.
. Tweet
Posted by Molly at 10:17