While our policy-makers have been striding around their Cotswold estates burning off an excess of Christmas pudding, elsewhere in the world events are occurring that provide further signals that the economic game we have played so effectively for the past two centuries is being superseded.

Do not let your festive white-out blind you from the important decision taken a historic decision to avoid the dollar in their trade relationship. As reported on this blog, for some time China has been arguing for a change in the global terms of trade, a system that has hugely benefited the USA since it was negotiated at Bretton Woods in 1945. The US has refused to negotiate and so China is now taking bilateral action, and Japan appears to be following a similar strategy.

Japan and China have agreed to make direct currency exchanges to settle their external trade balances, rather than negotiate via the dollar. In addition, Japan will buy Chinese government bonds. This shifts the Chinese renminbi towards the status of a reserve currency that China's economic power suggests, although the currency is still controlled entirely by the government, rather than being available for free exchange as the other reserve currencies have been until recently.

The extraordinary fact that the dollar is still the global medium-of-exchange, giving the US completely undeserved and misused global economic advantages, is omitted from discussion of our economic woes. And yet the way that the City operates as the 52nd state leaves us increasingly vulnerable in a world where the powerful economies are those who produce and gain access to resources, rather than those who control currencies. 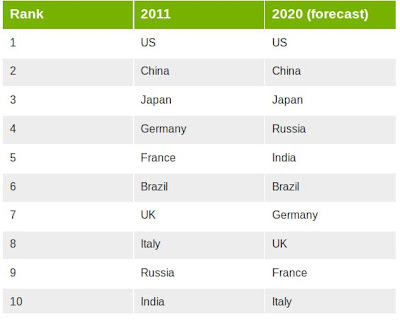 Another sign of the UK's vulnerability emerges from a report showing that we have been overtaken by Brazil in terms of the global economy league table. As the UK economy shrinks and those of the resource-rich and industrious economies outside the West expand, this is more a shock than a surprise. These economies face another significant advantage over those of Europe: they are able to create their infrastructures in a way not dependent on fossil fuels and hence face significant advantages in terms of a green economic future.
. Tweet
Posted by Molly at 09:46