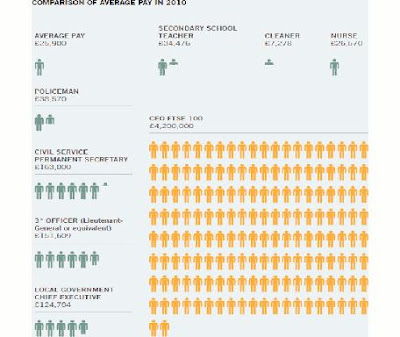 Last week the High Pay Commission reported the results of its detailed survey of the structure and culture of remuneration in some of our largest companies. Yesterday's headline in the Independent ('The rich get richer and the poor get poorer') may result from the decisions about public spending made by the Chancellor, yet the origin of the huge increase in inequality in our society is in the way pay setting takes place in the private sector.

Perhaps it would not be going to far to conclude that while the Tory governments of the 1980s and 1990s liberated the private sector to pay top executives out of all proportion to their performance, it is the current coalition government (which has never had a majority of support) that is undermining the redistributive policies that previously held inequality in check.

The graphic illustrates the differences in pay between teachers (£34,476), cleaners (£7278) and higher level civil servants (£163,000), none of whom come anywhere close to the average pay of the CEOs of FTSE 100 companies, at £4,200,000. Perhaps even more striking is the relative increase in the pay of top executives between 1980 and 2011. The Barclays executives have seen their pay rise by nearly 5000%, while those of BP have received increases of more than 3000%.

The report is a useful source of data that helps inform the debates we are having, in these times when the struggle for value within capitalism is becoming more explicit. The recommendations for change, by contrast, are surprisingly weak. Putting employees on remuneration committees is all very well, but unless they are in a majority they are likely to be intimidated and their views dismissed. Similarly, forcing companies to publish pay ratios will aid transparency, but amongst the shameless people who head our companies it is unlikely to bring any change.

A government really concerned about inequality and the pernicious effects of high pay could easily introduce a tax regime that would make pay above some upper limit, say £1m, meaningless, since it would all be reclaimed for the public purse. But then that sort of government would be unlikely to reach power in our less-than-democratic political system.
. Tweet
Posted by Molly at 13:28