Time for a Christmas Carol 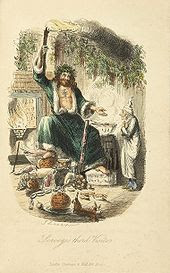 We are going to have wall to wall Dickens this Christmas. His bicententary has come at an apposite moment: we have never needed his wisdom and his diversion more. He has a strong claim to be our second national writer after Shakespeare, and this must be because we need the moral of his tales as much now as we did when they were written.

Personally I have never got along with Dickens, finding his characters unconvincing and preferring the earthier tales of George Eliot, with the greater depth of relationship and her overwhelming and winning compasion. The ubiquity of Dickens this year has taught me that I was wrong. Dickens's characters are intended to be unreal because his writing is allegorial, not realistic. This is the reason they have daft unconvincing names, but names that tell you immediately what role the character is to play in the morality tale that you are reading (or watching).

The point is most obvious in A Christmas Carol itself, where the unhappy Ebeneezer Scrooge is given the chance to abandon his love affair with his account-book and rejoin the human race. We remember scrooge as a miser, but this is not the role he plays. The Scrooge is actually the businessman driven by the quest for profit rather than people, abandoning love and humanity to commit his time to his enterprise. This book is a tirade against capitalism as powerful as any camp staged outside St. Paul's or any pamphlet from Marx and Engels. It tells how capitalism distorts the human spirit and, most importantly, makes even those who succeed within the narrow and shallow rules of its game, almost as unhappy as it makes the losers. And because capitalism, in its rotten essentials, has not changed, the message is as relevant 200 years on as it was in 1843.

Meanwhile, the characters of Bleak House are fixated by a legal case from which only lawyers gain, the Jarndyce and Jayndyce chancery case standing iconically for the project of any who would dedicate his or her life to the pursuit of financial reward. Many characters in the novel see relationships and health destroyed while they battle for their 'expectations'. The choice of this word throughout the Dickens oeuvre so neatly sums up the way capitalism always offers but never rewards, thereby ensuring a lifetime's unhappy slavery and a perpetual discontent.

At the end of this year during which we saw the 99% who place love and common humanity above profit and power challenge the 1% who are destroying human society and the planet simultaneously, we should congratulate ourselves that this division has been articulated. We must gain in strength as a movement in 2012, but also as individuals we can try to share the Dickensian sense of comfort and joy and remember that both are for life, not just for Christmas.
. Tweet
Posted by Molly at 08:17