Carbon Politics Down Under 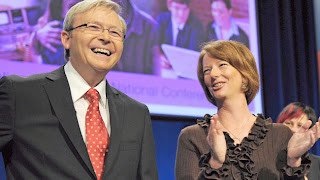 The final word in my short recent series on the developments in carbon policy in Australia should be given to Clive Spash , who was there on the inside and, as an academic economist of the social-ecological position, in a strong position to analyse the policy outcomes from a planetary perspective.

Spash has produced a paper describing how Julia Gillard was able to depose the previous Prime Minister Kevin Rudd, also of the Labour Party, because of the unpopularity of his carbon emissions trading scheme. The powerful mining sector lobbied strongly against this and the opposition thus generated, most on the basis of untrue claims about the effect on ordinary Australians, allowed Gillard to successfully challenge Rudd and create a new government with support of Green and independent MPs.

Spash describes how the political compromise involved a temporary carbon tax for three years, to be followed up by an ETS very similar to that which had been proposed by Rudd and at considerable political cost:

'That cost extends to allowing major emitters to make guaranteed windfall profits from pollution permits. The emission trading scheme suffers numerous problems, but the issues raised show taxes can also be watered down and made ineffectual through concessions. Taxpayers will get no assets from the billions of dollars to be spent buying-off the coal generators or other polluters. The scheme hopes to stimulate private investors to create an additional 12 percent in renewable electricity generation by 2020.'

Spash sets a much more stringent target of a wholesale shift to 100% renewable energy within a decade, the only proposal he considers 'serious' given the urgent nature of the issue of climate change. His working paper explores the difficulties of implementing meaningful greenhouse gas taxes in Australia.
. Tweet
Posted by Molly at 10:27