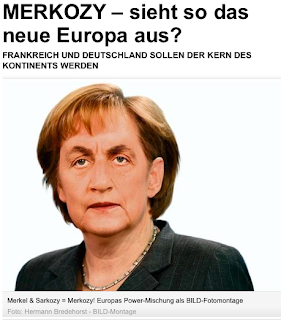 The delight about the rapprochement between Merkel and Sarkozy was short-lived, being undermined almost immediately by a threat from the credit-rating agency Standard and Poors. How are we to interpret these events?

The estrangement in the Franco-German affair was the result of Merkel taking a hard line on monetary policy and refusing to sanction the direct creation of money by the European Central Bank to ease the debt problems of the 16 other Euro members. Apparently yesterday she relented on this, allowing a relaxation of monetary policy in return for a new treaty imposing debt restraint on the Eurozone members.

In response to this a downgrading of the quality of the debt of most Eurozone countries might seem reasonable. But why Germany, which is clearly capable of paying its debts? It appears that this may be more an act of revenge for Merkel's previous insistence that bond-holders must bear some of the cost of their risky investment decisions. The Greek hair-cut was the last stand of a politician who would not accept that the innocent would bear all the pain. Germany will now be punished for the losses this brought to financiers, its own national debt now attracting higher interest rates than the state of its economy demands.

More fundamentally we might question why the US and UK, who are far more debt-ridden and whose economies are struggling much more than that of Germany, are not being threatened in the same way by the markets. The huge money-printing operations of both the Fed and the Bank of England makes investment in these countries far more risky, as does their lack of real production and their low rates of growth, and yet they are not the target of the credit raters. The conclusion is clear: the credit-rating agencies are rating finance-friendly policies, not the strength of national economies and the debt they issue.

More fundamentally the explicit evidence of economic policy being negotiated between politicians and rating agencies makes more urgent the need for politicians to have the courage to articulate an alternative and to co-operate to reclaim the democratic power to determine the direction of their own economies. We need to find a way through this present crisis that is compatible with democracy, not just compatible with the wishes of market investors. If alternative views are not articulated then we will be heading for a political rupture rather than the evolution to a more stable and equitable economic model that our happiness and well-being requires.
. Tweet
Posted by Molly at 09:57