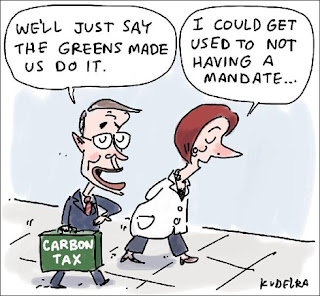 In support of the courage of dissenting economists I posted the news that Clive Spash had been forced to resign from his post at Australia's publicly-funded research body CSIRO almost exactly two years ago. The political disagreements over how Australia, one of the greatest carbon emitters per head of population, should address its climate sins, has resulted in the carbon tax also discussed recently on this blog.

The behaviour of CSIRO has now reached the Australian parliament, with questions raised over CEO Megan Clark's involvement with financial organisations involved in carbon trading and the fact that Simon McKeon, executive chairman of Macquarie Bank’s Melbourne office, was appointed as CSIRO’s chairman. In connection with the paper 'The Brave New World of Carbon Trading' that was at the heart of the dispute, Senator Colbeck asked:

'CSIRO’s internal review concluded that the original paper did not report new research or present empirical evidence to support all of the authors’ conclusions. The paper was also viewed as offering opinion on matters of government policy by applying a critique of neoclassical economic theory to the ETS. Therefore it was not approved for publication. Were those issues to have been rectified as CSIRO strived to do with Dr Spash, CSIRO would have supported the publication of that paper and any public comments that related to the papers findings.'

As Peter Earl notes in his post on the Real World Economics blog:

'This organisation apparently rejects institutional analysis, historical analysis, descriptive analysis and policy analysis . . . it is now evident that the fact that [Spash's] critique was levelled against the use of neoclassical economics as foundations for the policy was the heart of the problem. Their statement explicitly supports neoclassical economic theory and rejects anything critical of that theory because it is being used to support carbon emissions trading. According to the CSIRO this was not about the content or politics!'

This is a rare explicit statement of the role that neoclassical theory plays, much more one of catechism than of scientific theory. As the global economy spawned by four decades of neoclassical theory founders between the Scylla of ecological disaster and the Charybdis of the renewed credit freeze, we need thoughtful pragmatic economists like Spash more than ever.
. Tweet
Posted by Molly at 13:07