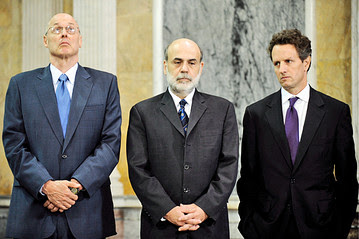 When I was young we once played a fantastic game with this name. It involved drawing up a list of items which would be very hard to access, then assembling a week later in teams and thieving said items. The most daring raids garnered the most points. I was a wimp even in those days and spent much time gathering many, many milk bottles.

I'm not proud of relating this tale, but even now I remember the excitement of the game - the edginess and competitiveness attached to doing something that was not permitted and involved the thrill of the chase, since some items were unique and had to be stolen before others reached them.

This game was brought to my mind recently, when I read for the first time about the true nature of the extraordinary deception that was practised on the US people under the guise of 'rescuing' financial institutions. Here is the story that set my teeth of edge, and reassured me that there are some journalists who still understand that their job involves investigation and not mere reportage.

The reporters from Bloomberg have picked over the ashes of the dodgey deals between the US Treasury Department, Goldman Sachs, the New York Federal Reserve Bank and the insurance giant AIG. The latter had been creating the infamous ‘credit default swaps’ that bundled up worthless unpayable loans as assets. After the bubble burst, AIG had been trying to persuade the banks to share the losses by taking less than the full value of these ‘assets’ – the article mentions a rate of only 60% of the stated value.

This was all happening a year ago – when most of us were looking on aghast at the instability and destructiveness of the financial system – but the sharks were looking for a killing. The then Treasury Secretary Hank Paulson (the former CEO of Goldman Sachs) used his political power to force AIG to recompense the banks in full. On the basis of this, current Treasury Secretary Timothy Geithner (then President of the Federal Bank of New York) refused to accept any deal with AIG, precipitating its collapse. This collapse was only prevented by an injection of public money amounting to $182 billion dollars.

So here is the larceny. A massive sum is transferred from the working people of the US to a few powerful and extraordinarily rich men. We cannot trace the exact details of how two former bankers who now run the US economy receive their ill-gotten gains, but the picture is fairly clear even without this detail. We are no longer watching politicians bailing out banks; we are being governed by bankers for their own benefit. Tweet
Posted by Molly at 08:08