Time for a Real Jubilee 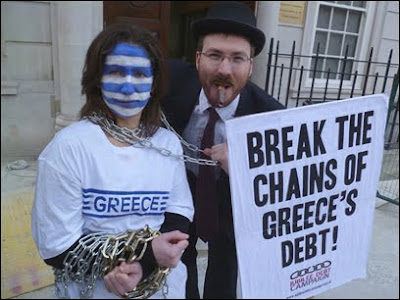 I am not sure whether the coincidence of the next critical phase in the global credit crisis with the celebration of the Queen's jubilee is ironic or tragic, but it certainly gives me an opportunity to explore the real roots of the concept of jubilee, a concept whose real meaning could not be further from the spectacle of disempowered British citizens, burdened with the debts of their unaccountable elite, paying homage to the figurehead of the system of unequal power and property relations that oppresses them.

A jubilee is not an arbitrary celebration of any feature of civil society that has simply lasted a certain number of years, rather it is a distinct legal requirement introduced by the ancient Jewish community to ensure that the ownership of land and property did not become too concentrated. In the ancient world, as in ours, bad luck or bad character could mean that some fell into debt slavery, but the inherent spiritual offensiveness of such a status required the possibility of release, and this was realised in the jubilee that occurred every 7 x 7 years.

I am not an aficionado of the Jewish bible so I am relying on the interpretation of the German theologian Ulrich Duchrow whose book Property for People not Profit explores these writings as a prescription for a world of economic justice. His interpretation of the writings of prophets such as Isaiah and Micah was that they were critical of the devastating consequences for the Jewish people of social and economic injustice. The jubilee - the freeing of slaves, the returning of land to its original owners, and the cancellation of debts - was proposed to ensure the stable functioning of Jewish society:

'To sum up, according to the Book of the Covenant, in view of God's solidarity with all his creatures, the needs of real life, including freedom from oppression, write the economic rules.' (p. 18)

I had always assumed that Jesus, who was clearly either a communist or a hippy or some combination of the two, could be called in to support my opinions regarding economic emancipation, but now it seems that he was merely reviving ancient wisdom that had been lost in the decadence of the Roman world.

I have been posting for some time about the contemporary proposal for a debt jubilee, a process that begins with a campaign for a Citizens' Audit. I have now finished a full paper on this proposal, including detail about its origins in international law. You can find the paper on the Social Science Research Network, and I would be grateful if you could use the opportunity of the jubilee to share it with your friends.

So, enjoy your bank holiday. Although many radicals criticise the Windsors for being out of touch, I credit them with enough understanding of working people to know that giving us holidays from labour is a useful way to reach our hearts. It seems unlikely that the members of the elite we have bizarrely elected to run our country would have increased the number of days when we are allowed the freedom to do what we really enjoy: chatting, resting, and drinking. But wherever you are, please use the opportunity of the unusual occurrence of the word 'jubilee' in everyday speech to remind people of what it was really for. If we could resuscitate the concept of jubilee in everyday understanding we would no longer need to rely on the magnanimity of an unelected elite to enjoy a well earned rest from work.
. Tweet
Posted by Molly at 07:40