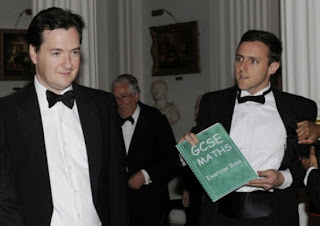 At first sight the 'new' policy announced at the Mansion House last night is incomprehensible. Banks, whose job is to create money to lend to companies, are to be loaned money at low rates of interest to lend money to companies. This bizarre and pointless piece of choreography appears to ignore the fact that banks have the ability to create their own money without the Bank of England's involvement, and that what limits their lending is the absence of companies seeking loans which they, as profit-making institutions, consider worth the risk. Following the previous policies of quantitative easing, Project Merlin and the Loan Guarantee Scheme, this new policy indicates not only the continuing desperation of Chancellor and Governor but their stubborn insistence that private-sector solutions growing out of monetary policy will solve our problems.

The reason for the impasse is more ideological than economic. Those with power are just refusing to accept that monetary policy is not, and never was, a private affair. The 2008 crisis made clear that the citizens of a country stand behind their banks and that a banking crisis, unless dealt with early and in a way that allows banks to make losses, will become a sovereign debt crisis. In the UK case, we went even further than this, taking control of some of our largest banks, which have in reality been transferred to the public sector. As such, they could be used to send money directly into the economy, not via banks that are too nervous to lend, but directly to fund green infrastructure projects or other transitional public investment. What stops this from happening is the destructive ideological mantra that says the private sector should grow while the public sector shrinks. This is maintained not because it is working, or because it would make our country a better place, but rather because it is an article of faith for free-market believers.

This foundation of economic policy on inappropriate ideology also prevents the Chancellor from insulating us against the problems of the Eurozone. While little can be done to reduce the impact of Euroland recession on our exports, this could be compensated by increased effective demand at home if the Chancellor used his control of our national currency to intervene positively in the economy. This is why economists across the political spectrum fought to maintain our national currency. Similarly, because we own some of our largest banks we can also insulate national monetary policy from the turbulence in the European banking system, at least to the extent that it derives from the internal contradictions of a currency area of which we are not a part.

We do not need to be suffering from the death spiral, which is largely of the Chancellor's making. We could be using the opportunity of the bursting of the credit bubble to acknowledge the role of the government in monetary policy and to use that to shift the economic energy in our country away from finance and speculation and towards investment in a transition to a real green economy. The opportunity is there; it is only the ideological blinkers worn by our politicians that prevent it from being grasped.
.