Nature is Not for Sale 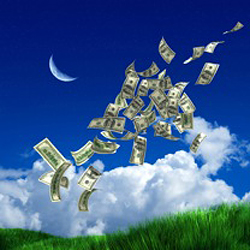 As we saw in the discussions at Rio, the marketisation of nature, through the development of concepts such as 'ecosystem services' and 'natural capital' has, in recent years, become an influential new way of thinking about the ecological crisis. Environmental problems ranging from habitat and biodiversity loss to climate change have been framed in terms of the need to create markets for pollution and to create shadow markets for a whole range of environmental 'goods' and 'services'. The National Ecosystem Assessment indicates that this is the dominant discourse of the UK government.

Many pro-environment NGOs have now fallen comfortably into this new discourse, so that we find WWF supporting a project encouraging payment to protect the health of local water systems. And here we find RSPB producing a detailed guide to exactly how you can go about putting a price of various aspects of the natural world. In view of the heavy support for this discourse from government, NGOs show a remarkable lack of scepticism towards terms like 'natural capital' and 'ecosystem services' that sound as though they were invented in boardrooms and no doubt serve these interests of those who inhabit them.

To be clear about what we mean by valuation, commodification and pricing is of crucial importance. Just as the ecological footprint was a useful metaphor for bringing home to people the impact of their consumption on ecological systems, so the idea of 'ecosystem services' is a useful metaphor for communicating the vast and essential value of the natural world to our economy. However this concept has broken its metaphorical bounds and is now exerting considerable agency amongst powerful decision-makers. The slippery nature of this measure-cum-metaphor is being exploited by those who seek to use the desperation and naïveté is some environmentalists to dismember and make available for sale the very natural world they seek to protect.

The confusion amongst economists and policy-makers is not helped by the fact that many involved in this debate are operating well beyond their expertise. The refusal of many economists to take seriously the empirical realities of climate change, preferring to remain barricaded within their mathematical abstractions, has left the debate around the economics of the environment to those with experience in the hard sciences but little knowledge of the history of theories of economics. The winners of the Blue Planet prize are a good example. While we pay tribute to their work in forcing this issue into political agendas at the highest level, we would suggest that they allow some space for the expertise of scholars of economic and social systems. And to the latter we issue a heartfelt plea that they make this a greater priority of their own research interests.
. Tweet
Posted by Molly at 14:08