How Green is My Parliament?

As Greens we generally have a fairly warm and fuzzy feeling towards Europe. After all, the European parliament has a large group of Green MPs and when it comes to European elections people actually vote for us in large numbers. The extraordinary experience of receiving 2 million votes inevitably leaves a pleasant memory with those of us who were part of that campaign back in 1989.

And the EU does have some notable environmental achievements, especially in terms of its adoption of targets and commitments, such as to reverse the decline in biodiversity by 2020 and to pour significant amounts of money into preserving habitats. While the LIFE programme represents less than 1% of the EU budget, it has protected some of Europe's more endangered species and it works better than comparable projects in other jurisdictions.

However, at a recent conference in London, Ariel Brunner from Birdlife International made a strong case that many of the EU policies actually operate as perverse incentives and can even have harmful impacts on the environment. The most destructive policies have been those associated with agriculture and fisheries. Pillar 1 of the CAP is the most destructive: clearly the result of political pressure by large-scale farming interests, it tends to send money towards the most destructive farms without any positive environmental or wider social results. Fisheries policy also has perverse targets, with 26% of the cash going towards fleet modernisation and exacerbating the problem of over-capacity, while 40% goes towards expanding ports, again supporting the large-scale industrial fishing which is destroying fish stocks. 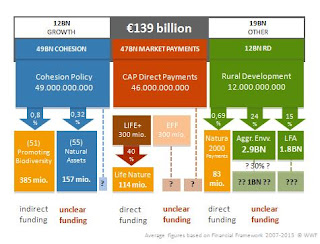 One of the best things about Ariel's presentation was a clear account of the EU budget, to the extent that a clear picture is possible for a budget whose auditors have for years refused to sign it off. The graphic shows the heavy emphasis on the CAP within the overall budget, and the slightly larger budget that is the 'cohesion fund' to redistribute money from poorer to richer countries across the EU.

The emphasis of European policy making is 'green growth' and 'green jobs'. While readers of this blog would probably join me in suggesting that 'green growth' is a contradiction in terms, encouraging the transitional investment necessary to create green jobs might be worth the political effort. A recent report showed that, during the next EU budget period 2014-2020, a €1 billion investment in conservation-related employment can create 29,000 jobs where the same investment in CAP will only create 6,200 jobs. If we are all in this economic crisis together, isn't it time that we stopped subsidising large landowners and spent that money to improve our shared environment instead?