Not Waiving but Drowning 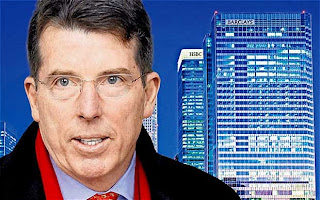 'There's not much to a bank except its licence, its computer system and its reputation.' Thus spake Martin Taylor on this morning's Today programme, the same programme that, with its recent behaviour as lackey of the elites, invited Bob Diamond to give its inaugural lecture in 2011. A member of the 'independent' commission on banking, Martin Taylor was Chief Executive of Barclays between 1994 and 1998. The extraordinary breakdown of retail banking services at RBS and its subsidiaries this week - the result, it appears, of offshoring vital services to under-qualified and under-priced programmers who could not be properly monitored - has seriously eroded confidence in one of those pillars. The fraud revealed by the IFS yesterday further undermines the reputation of Barclays, with other banks set to follow the same route to opporobrium. It only remains for the government to take from Barclays the licence of which bank executives have proved themselves utterly unworthy.

Although the Barclays scandal has pushed the Eurozone crisis off the front pages this morning, the two are intimately related. As the previous post on this blog indicated, the sovereign debt crises have also arisen as a result of banks bidding up the rates of interest paid by nations on the money they borrow from those banks, increasing bank profits while bankrupting countries and destroying their societies. As in their mainpulation of the LIBOR rate they have controlled what is supposed to be a free market to benefit their narrow interests, and the whole economy and wider society have suffered as a result.

What has not been mentioned in this recent round of scandals is that, in a capitalist economy, the banks' most important function is to provide the liquidity that brings into play the factors of production that enable economies to be productive. For years, our banks have failed to do that effectively, preferring to suck money out of productive sectors and local economies to feed it into speculative circuits and lucrative rewards to bank employees.

This situation has gone beyond discussion about regulation, of whatever degree of touch, and into the realms of serious political action. The government already holds controlling stakes in RBS and Lloyds on behalf of the citizenry. The withdrawal of Barclays' banking licence would leave the vast majority of UK banking in public hands. The government therefore has the active power to operate a proportion as public interest banking, keeping the value of money creation to invest in public projects, while the remainder are broken up and made available to be operated as a system of locally based community banks.

Please sign the e-petition calling on the government to withdraw Barclays banking licence.
. Tweet
Posted by Molly at 08:52