What a contrast there is between the attention paid to the first Rio conference and the low profile of the 20-year follow-up which comes to a head this week. I have already posted to raise the question of whether the carbon emissions of our politicians are worth the investment, when it seems that so little political progress is going to be made. What can explain the great difference in interest between the two conferences, especially when almost all the indicators of ecological crisis have become far more urgent since 1992?

First, I think we must not forget the huge vote for the UK Green Party in the 1989 European Elections. This indicated to politicians that people do care about the environment, but rather than introduce the hard-edged policies necessary to constrain the corporate economy, the politicians managed expectations and allowed the corporations to take over the green economy even before it was defined.

Secondly, we must not be naive about the vast amount of lobbying and deliberate confusion that has been caused. Today's launch of a report from the Green House thinktank indicates clearly that the claim that our greenhouse gas emissions have been falling since the first Earth Summit is a deception. Two of the most significant sources of CO2 emission are simply left out of the calculations: those caused by air transport and freight shipping; and those embodied in consumer goods we import.
If you put these and a few other sources of emissions that have been discreetly tidied away back into the picture it looks like this. 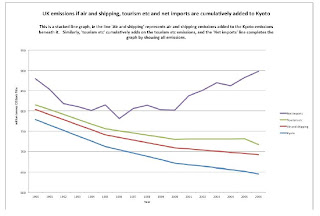 It is clear that emissions are continuing to rise. It can't have escaped the notice of Kyoto negotiators that these were the fastest rising sources of emissions, and omitting them from consideration is, as the report notes, rather 'like a chocoholic going on a calorie controlled diet and deciding not to
include chocolate'. The explanation can only be the result of significant, powerful and ultimately destructive lobbying on the part of those who profit from the global trade in goods and the massively increasing amount of air travel.