Whose Bailout? Whose Responsiblity?

A guest post from Professor Penny Ciancanelli of Glasgow University


Recently, JP Morgan research estimated that of the €410bn borrowed by the Greek government over the past three years, only €15bn went into the Greek economy.  The rest went to Greece’s creditors.

The first question raised by these facts must be--who got the money borrowed by the Greek government?  The answer is mainly the German and French banks that lent money to Greece (e.g purchased Greek government bonds). 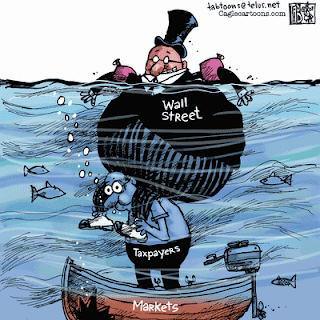 For nearly two years, the ‘troika’ of the ECB, EU and IMF created financial packages to pay off ‘private creditors’ using public money borrowed in the name of German taxpayers.  Just to be clear: The bankrupt German banks were recapitalized with German (and Dutch and Finnish) taxpayer money but via troika repurchase of Greek bonds.   The theatre piece of merit is the mis-representation of the bailout of German banks by German taxpayers as a bailout of Greece by their friends in the Euro club.

The second question raised is why the narrative?  After all neither the US nor the UK government made any pretence; they announced they would use public resources to bail out their banks.  Indeed, politicians of the right in both countries have sought to make a virtue of increased government debt by forcing through radical changes in the scale and scope of government activity.

The reluctance of the French to admit its banks were bankrupt and recapitalize them could be attributed fears of being shut out of the bond markets, given already high level of public debt.  The reluctance of the Germans is harder to figure since they could afford (technically) to bail out the banks.  It is worth noting, however, that the banks it would have had to bail out the most were precisely those (Landesbanken) most successfully tricked by derivatives traders in London and New York.  Hugely embarrassing really.  So rather than take the hit on derivatives trades, better to get dodgy sovereign bonds taken off the balance sheets.

Once undertaken, the strategy conjured up by Merkozy two years ago (of hiding the de facto bankruptcy of its own banks) elevated the problem into a crisis of the Euro (a pure miscalculation owing much to the surprising financial illiteracy of both).  Both leaders had to carry on regardless of the cost to Greece.  For example, about three weeks ago the Greek government borrowed another €4bn or so from the EFSF (an EU finance facility) to pay €4bn to the ECB (another EU finance facility).  At the same time, cancer patients in Greece could no longer get the drugs they need.  But this is the price Merkozy decreed must be paid to keep up the appearances both thought would hide their own bankruptcies.

What next? After the Greek elections, the same people who agreed the debt burden will ask for better terms from the troika.  They will probably get some headlines.  It won’t last.  After all, it must soon occur to someone that economic growth is unlikely to result from Merkozy imposed at EU level which to date consists of the ECB lending money to the bankrupt banks of Portugal, Spain and Italy so that each bank might stuff its balance sheets with the sovereign debt of its own national lender of last resort--a tactic which implies zero net investment in the real economy.
.
Tweet
Posted by Molly at 07:30