Man who Makes his own Underpants Strikes Again 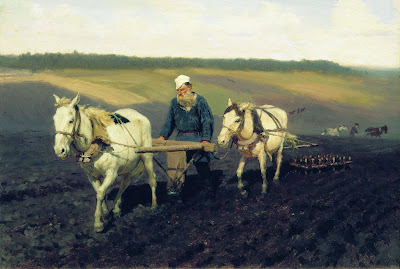 Those of you who enjoyed John-Paul Flintoff's Through the Eye of a Needle will be pleased to hear of his involvement in a new project to inspire and empower us all. I suppose we should not be surprised to learn that John-Paul's new endeavour has been inspired, at least in part, by Tolstoy. I have been following the latter's work with avid interest over the past few months. He was particularly lucky to have counted one of the 19th-centuries greatest painters, Ilya Repin, as a friend, so that his PR was in safe hands.

John-Paul wants to share Tolstoy's insight that history is ours to make. The media world feeds the mistaken Great Man view of history, theorised by Thomas Carlyle and with which Tolstoy struggled in person and in print. Tolstoy favoured the view that we are making history in our everyday actions and that we should remember the small things as well as the large. This is the philosophy behind John-Paul's new book How to Change the World, part of a series called The School of Life, edited by Alain de Botton.

John-Paul describes his project as follows:

'We all want to live in a better world, but sometimes it feels that we lack the ability or influence to make a difference. John-Paul Flintoff offers a powerful reminder that through the generations, society has been transformed by the actions of individuals who understood that if they didn’t like something, they could change it. Combining fresh new insights from history, politics and modern culture, this book will give you a sense of what might just be possible, as well as the inspiration and the courage you need to go about improving and changing the world we live in.'

I will leave the last word to George Eliot, who was well aware of Carlyle's Great Men but may have had at least as great an impact on the world as many of those men of war he championed. Here are the closing lines from Middlemarch, written about the heroine Dorothea:

'Her finely touched spirit had still its fine issues, though they were not widely visible. Her full nature, like that river of which Cyrus broke the strength, spent itself in channels which had no great name on the earth. But the effect of her being on those around her was incalculably diffusive: for the growing good of the world is partly dependent on unhistoric acts; and that things are not so ill with you and me as they might have been, is half owing to the number who lived faithfully a hidden life, and rest in unvisited tombs.'
. Tweet
Posted by Molly at 09:34