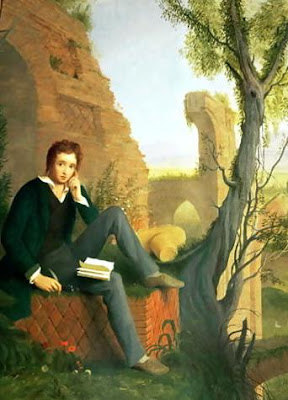 In his Philosophical View of Reform, published in 1820, the English radical and poet Shelley wrote the following in connection with the pressing need to repudiate the national debt:

'The settlement of the national debt is on the principles before lucidated merely an arrangement of form, and however necessary and important is an affair of mere arithmetical proportions readily determined; nor can I see how those who, being deprived of their unjust advantages, will probably inwardly murmur, can oppose one word of open expostulation to a measure of such irrefragable justice.’

This, I think, is a useful addition to the sterile debate around austerity or growth. Not only should we remember that growth is destructive of environmental justice, but also that financing public spending through debt is destructive of social justice. As Shelley also observed, ‘the national industry’ by which he tells us he means ‘to increase the labours of the poor and those luxuries of the rich which they supply' served only 'to augment indefinitely the proportion of those who enjoy the profit of the labour of others as compared with those who exercise this labour.’

His target, the economic system of capitalism which was advancing to global dominance 200 years ago, could, in his view, never achieve social justice. This is much the same argument as the Citizens' Audit movements, which are growing in strength across Europe, inspired by the example of the debt repudiations and refusal of further debt financing by the economies of Latin America. These were framed by the idea of odious debt, a most useful legal concept that dates back to the 19th-century, when the US wished to avoid responsibility for the debt of the states it had absorbed into its territory as a result of the Spanish-American War, specifically, the debt that Cuba had incurred under its colonial rules. It holds that:

‘debt should not be transferable to successor regimes if (a) it was incurred without the consent of the people and (b) was not for their benefit (Alexander N. Sack, 1927; Ernst Feilchenfeld, 1931). The underlying principle is that just as an individual does not have to repay money that someone fraudulently borrows in her name, and a corporation is not liable for contracts that its chief executive officer enters into without authority to bind the firm, a country should not be responsible for debt that was incurred without the people’s consent and was not used for their benefit.’*

An idea that was developed for a single pragmatic requirement and had gathered dust in legal libraries came back to public attention in 2003, when US Treasury Secretary used it as justification for repudiating the debts incurred by Saddam Hussein when it took over Iraqi territory. It derives from a strong moral sense that those responsible for acquiring debts should not be able to force this responsibility onto other who have neither consented nor benefited from them:

‘It is morally repugnant to saddle the population of a country, down unto generations yet unborn, with the obligation to repay debts that are truly odious in the Sackian sense. Most people instinctively believe that the consequences of reprehensible acts should be visited exclusively on the malefactors (in this case, the corrupt regime and its complaisant creditors). The question is whether this moral imperative can be translated into a workable legal theory.’**

The concept of ‘odious debt’ has been related to debt acquired by regimes that have been regarded as illegitimate in international law either because they were oppressive, or undemocratic, or because a change in state regime rather than just government had taken place, in the case of Cuba and Iraq due to external invasion. But might we extend this concept to stable western democracies, whose citizens are now struggling with oppressive debts? Recalling Sack’s two conditions—that the debt was incurred without the consent of the people and was not for their benefit—can we apply these conditions to our own situation in the UK?

This is not the place to enter into a philosophical or legal discussion of consent, but such a route might be fruitfully followed in an area where ignorance on the part of the citizenry was so widespread. A clear finding of the various popular books that have emerged in the wake of the financial crisis is the opacity surrounding the behaviour of financial institutions and their employees, which left many key policy-makers and politicians, not to mention the citizens who trusted them to regular the sector, ignorant of the ‘dark arts’. The role of the public in supporting the banks that are headquartered on their soil was not well understood, suggesting that meaningful consent to the financial costs of this can be questioned.

Whether or not it was for the benefit of UK citizens is perhaps more problematic. In a situation where the Chancellor of the Exchequer publicly stated that we were within hours of the cash-point machines failing, there was clearly a strong public need to support the monetary systems, which required nationalising the banks at vast public expense. But UK citizens were unfortunate that some of the world’s largest banks were headquartered on their soil, and this led to their supporting a banking system for the general global good at their personal national expense. Whether the tax receipts during the boom justified the cost of the bust to the UK balance-sheet is one question that a Citizens Audit could seek to answer.