Is it the Economy, or is Osborne Stupid? 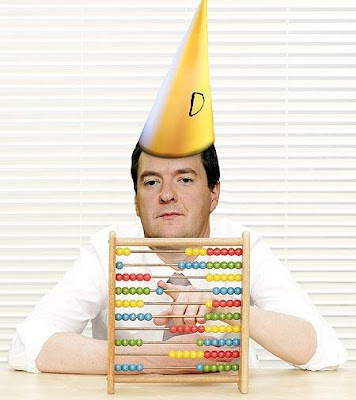 Now George Osborne has me really worried. We are all used to him misrepresenting how the economy works to score political points: there is no alternative to austerity, no wealth is created in the public sector, and so on. But this morning on the Andrew Marr show he seemed to just plain misunderstand something.

If you watch the beginning of the interview you will hear him make a familiar point about how we are benefiting from low rates of yield on our national debt because of market confidence in the savagery of the austerity policies being imposed. He then seeks to imply that this has a direct link to household finances via the interest rates they pay mortgages, and to growth via the interest businesses pay on loans. But in reality these are connected only indirectly if at all. The Bank of England has set the interest rate at 0.5%, which explains the comparatively low interest rates faced by households and businesses. If there is a connection between this and the yields financiers demand for gilts then I would be glad for a commentator to explain it.

This is precisely why the eurozone countries are in the hole they are in. They can control neither the rate they are charged for their debt, nor the rate at which money is priced, since they have abandond their central Banks and are now subject to the interest rate set by the European Central Bank. In fact, that rate has remained resolutely low as rates charged on Spanish or Greek debt has swung wildly, again illustrating Osborne's error.

The main advantage we have over the countries of the Eurozone is that we can print our own money and set our own interest rates. That gives us considerably more room for manoeuvre and scope for fiscal stimulus like that undertaken in the US, but which the European economies do not have the power to implement. Osborne should gain credit for helping to keep us out of the euro but, if he agrees with the independence of the Bank of England then the he cannot claim credit for low domestic interest rates.

Osborne's is, at best, a high-risk strategy. What if the markets turn? The rate they charge us for debt is entirely within their control and is the result of a calculation about how they can extract the most value from their various holdings of peonage and bonded labour across the world. If the countries of southern Europe cease to yield such healthy returns then they will turn their greedy eyes in our direction. We could find ourselves in the of a sterling crisis sooner than we think.
.