It's the System, Stupid!

So the Eurozone is on the brink of slipping back into Recession. The latest growth figures indicate the growing inequality that the single currency is causing between Europe's countries. The quaterly rates of growth range from -1.3% in Hungary to +1.3% in Finland.Meanwhile, annual rates of growth in 2012 compared with the same quarter in 2011 are truly shocking. Greece is showing a contraction of 6.2%, while the Portuguese economy contracted by 2.2%. The Netherlands shrank by 1.3%, while the UK is registering at zero. In the case of Greece, Spain and the countries that are showing disturbing rates of contraction, the austerity measures are the key cause of this. The failure to understand this appears to be wilful stupidity.

The first graphic indicates the relationship between government withdrawal of investment and the failure of growth. We can clearly see the economy take a nose-dive in 2008, then return to stability and slow growth as a result of Labour's stimulus policies, before nose-diving again once the Tories were elected. Do these politicians really not understand, or refuse to understand, the nature of economies as complex system, and the importance of multiplier effects? This refusal is a type of ideological blindness which is devastating all sectors of the UK economy and destroying jobs and livelihoods.

Why is it so easy for politicians to convince voters of this mistaken view of how an economy works? I think the answer lies partly in people's unwillingess to think systemically, and in this it is related to the problem we face as Greens of persuading people to think about ecological systems. As far as the economy is concerned, I have produced two graphics, which I hope help to explain how Osborne and his ilk have the economy completely wrong. We need to encourage people to stretch their minds to seeing the economy as a system, not as a linear series of transactions. 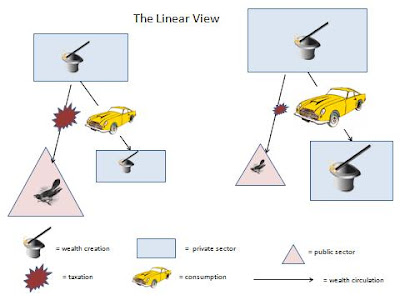 The first graphic represents the Osborne view of economics: a view that was, until recently, accepted as hegemonic by most media outlets. The first assumption of this model is that wealth is only created in the private sector. Tax then removes this wealth and feeds it to the greedy public sector, which destroys it. What remains stimulates consumption-based economic activity. If the money paid via tax to the public sector could be shrunk, as in the right-hand panel, then the private sector would expand and the economy would be more successful. 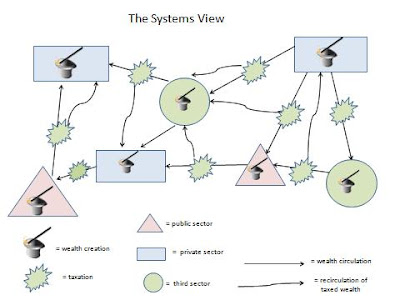 The second graphic represents the economy as a dynamic system, with public, private and third sectors all interacting. Wealth is generated in private, public and third sectors. Taxation is paid on all economic interactions, and that taxation becomes investment in further activity in all three of the sectors. Conclusion: the way to revive the economy is to increase the circulation of wealth and stimulate greater activity.

This is not a complicated argument, and it requires only a short application of mental effort to realise that the first model is simplistic and wrong. It is some combination of mental laziness and ideological perversion that prevents the majority of European citizens from grasping this - and demanding economic policies that respond to it.