Not Man With a Plan but Solidarity against Finance 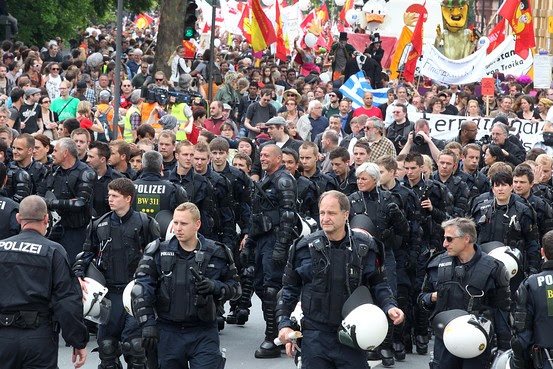 After Bush it was a relief to have in Obama a US President who was witty, urbane and physically attractive. However, in policy terms I think we have to admit that he has been an utter failure. US citizens need a President who can stand up for them, as Roosevelt did in the 1930s, but the US seems like a state utterly captured by financial interests. Although we will never know what happened around the Camp David hearth, we can be sure that the pressure was on Merkel to provide more cash for the vulture financiers.

It has been embarrassing in recent days to see the self-created powerlessness of our 'leaders', as one after another they call for a plan to tackle the exhausting and debilitating crisis. The absence of leadership results from the obvious fact that what is needed is a political challenge to the power of finance, while all our politicians are utterly in hock to those same financiers. The only solution to this crisis is to be honest about the gap between the real economic value of the world's economies and the phoney book value, and then to negotiate an arrangement to bring these back into balance. This would mean huge losses for all those who control the financial value. This is why it never reaches the negotiating table. Instead we have political performances of terror and concern, which are intended to soften us up for the next round of ruthless exploitation and loss of social and democratic rights. I put forward such a plan last summer, and it still seems just as relevant today.

This weekend 20,000 European debt audit campaigners have been camped and demonstrating in Frankfurt, the heart of European financial power and home to the European Central Bank. They have a simple platform of demands: refusal to accept a fiscal pact that puts finance in control and sidelines democracy and the needs of ordinary people; expression of solidarity with the struggles of the people of Greece and support for the political platform of Syriza; and rejection of the way that the debt crisis is being used to usher in the next phase of neoliberalism, that is to say financialisation and the sale, at often low prices, of public assets. Their call is for a thorough audit of all European public debts and state assets so that a real negotiation can take place about what the value of the economics is and how it can be fairly shared.
. Tweet
Posted by Molly at 07:55