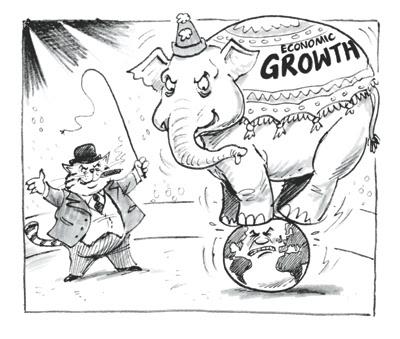 Two reports came out on 21st May which was also, incidentally, my birthday. The first was the report of the Environmental Audit Committee's inquiry into the Green Economy. I gave evidence there on behalf of the Green House thinktank, following up on our written evidence. I was in an evidence session with David Powell from Friends of the Earth and a representative of the TUC. It is encouraging that, as well as Green House's evidence, WWF, NEF, and others were clear that a green economy will be one that respects planetary limits and recognises that we must restructure our economy so that it does not rely on perpetual growth.

The Committee chose as its media hook for the report the fact that deregulation is undermining attempts to move towards the green economy, a rather dull angle which failed to arouse much interest. The real political question of our time - whether we can ever or should ever return to growth - was ignored. Perhaps it just seemed too far from the hegemonic idea of the urgent and unassailable need to return to growth as the only solution to our economic woes.

The EAC's report focuses rather on 'current patterns of economic growth', in spite of clear evidence from Tim Jackson about the fact that decoupling growth from resource and energy use is a chimera. However, they did quote at length a list of groups who took a hardline view on growth:

'52. Many saw the Government’s current agenda as focusing too much on growth and too
little on measures to protect the environment and ensure environmental limits are not
breached. David Powell of Friends of the Earth believed that current government policies, including Enabling the Transition, were being presented as “growth first ... let’s try and make it green and anything else we can do is fantastic”. . . We also heard concerns that, without a definition of sustainable development being included within the new planning guidance, proposals to introduce a “presumption in favour of sustainable development” would lead to unsustainable development. RSPB believed greater thought should be given to whether the “continued push for growth is in fact in conflict with prosperity in the longer-term”. The Packaging Federation believed there was little sign that the Government understood a “real danger of a fundamental incompatibility between UK climate change goals and economic growth”. Green House believed that a strategy of export-led growth was incompatible with a green economy as “it relies on lengthy supply chains and hence an extensive use of energy and so contributes to climate change”.'

Our idea of 'transitional growth' was also cited: 'Green House believed that economic growth was only possible in the short-term as part of a transition strategy to move us towards an economy that is in a steady state. Such economic growth would be confined to replacing infrastructure to enable self-reliant economies stabilising the economy within our national resource limits.' And we were quoted as stating that 'because of the “unfeasible nature of the increased efficiencies required and the nature of rebound effects associated with technological improvements”, seeking to decouple economic growth and production from CO2 emissions “is an example of psychological denial”.

Oxfam also gave evidence, which brings me to the second report I wanted to draw attention to: Be Outraged: There are Alternatives, an attack on the present absurd economic policies being followed by Western nations from a group of development economists published by Oxfam. The report states 'that the austerity approach to reducing deficits and debt is counterproductive; it is leading to a downward spiral of incomes and government revenues making it more difficult to reduce the debt and undermining growth prospects.' The report is authoritative and useful in bringing together clearly and critically the consequences of misguided economic policies including: 'More than 10 per cent of European adults are unemployed, up by 50 per cent since 2008. More than one in five- 22% - youth under 25 are unemployed and in some countries over 40%' or 'Top incomes have soared in the UK and US especially: the globe’s richest 1 per cent (61 million people) earn the same as the poorest 56 per cent (3.5 billion)'.

Overall, though, the report is fairly standard Keynesian stuff and, although Oxfam gave evidence to the EAC and devote attention to the structural problems with the growth economy, this line of their work does not seem to join up with their attempts to challenge austerity politics. As the Green Party has found, resolving the tensions between social justice and a steady-state economy is not always easy, but no organisation or research institute that has understood the need to respect planetary limits should now be producing arguments for growth.

Green House is running a personalised campaign to shift the media position on this question: please join us. We are targeting the BBC, on the basis that we pay for them, and because their email addresses are easy: firstname.familyname@bbc.co.uk. Each time you hear the hysterical statement of the universally acknowledged need to return rapidly to growth, please email the person who has made this statement, giving them some links to clear statements of the destructiveness of this position. You can refer to work by Green House, the EAC report, or more broadly the website of CASSE - the Centre for the Advancement of a Steady State Economy.
.