One of the questions I encounter most frequently is how the vision for a sustainable society we are developing in the market town of Stroud might be applied to the cities where most of the world's population now live. This is a troublesome question for me, because I have never enjoyed the city, with its concrete and anonymity, but from an ecological perspective no question is more important. 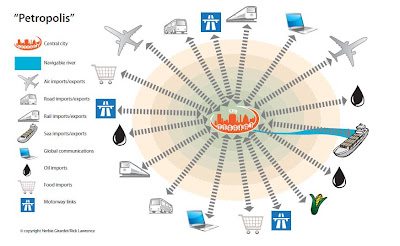 Part of the answer is that the transition to a sustainable future will mean different patterns of habitation. The growth of cities mirrors the process of industrialisation and, in particular, the exploitation of fossil fuels on which they depend. There are no two ways about it: cities are grossly unsustainable. Herbert Girardet, who first discussed this issue in the Schumacher Briefing Creating Sustainable Cities, presents some disturbing statistics, including that 'Cities, on 3-4% of the world’s land surface use 80% of its resources'.

Herbie has gone beyond alarming statistics to exciting plans, which he calls 'regenerative cities'. So far the signs of hope have come from urban food growing in cities such as Havana and Portland, but the regenerative city is a whole shift in urban planning and a holistic solution to the unsustainability of the urban environment. 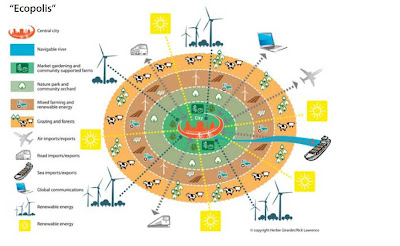 These cities of future - the orgacities of my outrageous title - will, of course, provide for their own energy needs from renewable sources, but in addition they will develop a 'circular metabolism', in contrast to the petropolis which sucks in resources and spits back wastes. They will be diverse rather than monocultural; rather than contributing to CO2 emissions they will be responsible for carbon sequestration; they will be embedded in farmland and provide their own food.

The report is a visionary document, but also contains numerous examples of the best that is already being done in urban planning. The example of Seville, a pioneer in solar generation, and Freiburg, Germany, whose Solarsiedlung development produces more energy than it requires, offer models for the future. However, changing our expectations and, perhaps most importantly, our sense of identity, is at least as important as these technological and design changes.

In the age of the iPad it is difficult to convince the laptop-bound of the simple beauty of the natural world, which they are most likely to encounter through Google Earth. Downsizing and de-energising our cities will offer one priceless gift: the stars. Ecological economist Richard Norgaard recently posted about 'economism and the night sky': he argues that, while technology and urbanism have provided much, what we have lost - and may regain - has deeper value.
. Tweet
Posted by Molly at 19:00