Hell fire or a bottle of Bulgarian red on the beach? 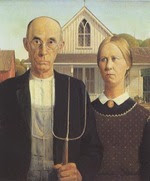 The early industrial workers were faced with a stark choice: a joyless life of work or an eternity of hellfire. It is unsurprising that so many took Kierkegaard's way out and struggled to keep a faith in eternal life. In a similar way many lives are being stolen today by an economic system which finds its own supportive ideology in the forced-work ethos of New Labour.

Like the beliefs of their Protestant antecedents, Labour's apparent belief that work is a universal panacea to solve all our social and economic problems can only have its source in faith. It has no basis in either fact or experience. As Brother Gordon intones from his postmodern, designer pulpit to the faithful journalists, the glint in his eye gives a clue to the messianic origin of his political project.
In fact the obsession with work pervaded Christianity for only a small part of its 2000-year history. Despite the odd desperate Biblical reference to his training as a carpenter, it is obvious that Jesus Christ himself was the prototype hippy. It was Jesus who advised his disciples to "Consider the lilies of the field; they toil not, neither do they spin". He spent most of his adult life telling stories, discussing the meaning of life, begging food from friends; and he had long hair and wore sandals.
The problem with religious commitment, however, is that it does not allow this sort of argument. We are not permitted to take issue with our Prime Minister about how we would like to spend our short span here on earth, either we take up our oars on the slave-galley of the economy or we are wicked sinners to be cast into outer darkness. Like Torquemada, enforcing belief in an insane ideology with the fire of the Inquisition, to be acceptable in New Labour Britain we must spout the litany of holy work: yes, I enjoy my job; since beings made redundant I have spent every hour on my bicycle seeking work; I don't enjoy being unemployed; I wish I could spend all my waking hours licking up toxic waste like you do (melody available on request).
The political commitment to work for all is taking on totalitarian dimensions. It is becoming almost blasphemy to suggest that we might not want to work, might not enjoy work, might rather sit on the beach and listen to the sea, or even (out come the garlic and crucifixes) prefer to stay in bed with a bottle of Bulgarian red. But New Labour ideology, like all religious ideology, is no diversity. Those who use their own energy to bolster an impossible belief cannot afford to listen to opposition. They will not enter the arena of rational debate. If it makes Blair, Brown and their brethren feel good to work hard all day then not I would not wish to stop them. What I would challenge is their right to impose their choice on the rest of us.
My own view is that most of the work that is carried out in a modern, advertising-led, consumption-based economy is both environmentally and socially destructive. Would we really rather that the uncountable unemployed all found jobs in the factories of transnational corporations making cars? Aside from the corporations' profits, who benefits from their work? Wouldn't they be better off living on a citizens' income and enjoying their lives? As I sit patiently at my postmodernised "work-station", watching my life tick away on the office clock, I think venomously of this crusade for jobs. And I rage against the New Jerusalem Labour has led us into.
Tweet
Posted by Molly at 10:50