You can tell that there is a major adaptation afoot when the Governer of the central bank of the country where capitalist finance is based starts to make interesting speeches. Do not be put off by the title, Global imbalances: The perspective of the Bank of England is radical stuff - heady, the FT calls it. Like King's speech to the Buttonwood gathering in New York this new statement is steeped in nostalgia for the era before Big Bang, when there was some degree of political control over financial interests, and bankers could not destroy the livelihoods of other citizens. 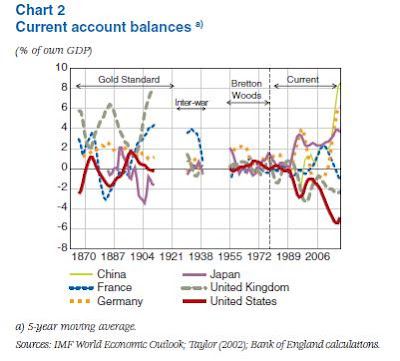 King expresses concern about the 'large and persistent current account deficits' being run by the UK and US 'while emerging market economies, in particular in Asia and among oil exporters, have been running current account surpluses.' This situation of imbalance in current accounts - the very situation that the Bretton Woods system was designed to avoid - results in instability and, potentially, conflict. The graphic shows how successful the Bretton Woods system was, and the mayhem that was evident before and after.

This paper must surely have been used to inform discussions amongst G20 finance ministers in Paris last weekend. The meeting agreed a resolution but the fundamental disagreement between China and the others over the desirability of total free movement of currencies and the need to address current account imbalances was apparent.

Mervyn King appears to agree with the Chinese. As illustrated in the second graphic from his paper, he associates free currency movement and financial instability:

'financial crises have been a hallmark of the current incarnation of the international monetary and financial system (IMFS),with the reappearance of global financial instability coinciding with the rapid increase in capital mobility.' 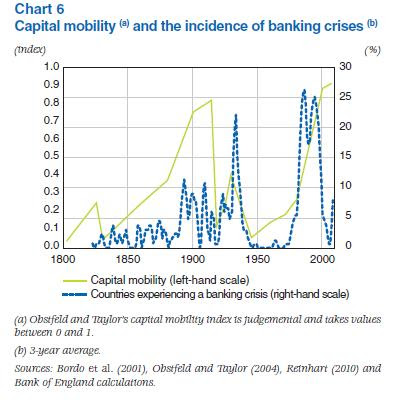 His conclusion is that finance ministers need to use a much wider range of tools than just interest rates. They should take back a positive management role in monetary policy, controlling capital flows, and encouraging an increase in saving rather than spending, as well as considering a revision of the 'role and governance of the international financial institutions'.
. Tweet
Posted by Molly at 12:09