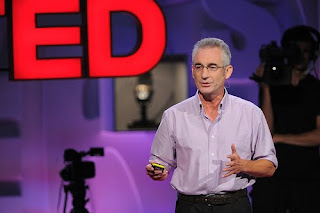 We are delighted to announce that Tim Jackson will be speaking at this year's Green Party conference, in Cardiff on Monday 28th February at the Angel Hotel in Cardiff. Professor Jackson is one of the world leaders in the debate about how we might develop our economy in a way that does not threaten the health of the planet. His TED talk has received glowing reviews.

Tim Jackson's book Prosperity without Growth grew out of a report he undertook on behalf of the Sustainable Development Commission. That was advice to the highest level of government that we had to end economic growth and undertake a radical restructuring of our economy. Perhaps we should not be surprised that the SDC was closed down shortly afterwards.

Professor Jackson will be in debate with Neal Lawson from Compass at 1pm on Monday. They will address the link between sustainability and equality in the context of economic recession and government spending cuts. This is an important debate for the Green Party and we hope that the session will enable us to find ways to make more of our commitment to living within our means while also ensuring equality and high standards of well-being.
. Tweet
Posted by Molly at 12:06