This is a desperate time to be young. The pressure to consume, to conform, to achieve impossible educational feats sucks the joy and freedom out of youth. And what was all the effort for, when statistics demonstrate that the employment situation facing our young people is worse than it has been for several generations. Nearly 1 million UK citizens under the age of 25 are out of work, a full 20.3%. This represents the highest figure since record began in 1992. 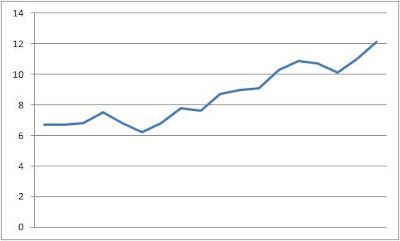 The graphic shows the trend for economic inactivity amongst 16-24-year-olds between 1993 and 2010 - a relentlessly upward trend that shows a doubling in the rate of inactivity in this age-group from 6% to 12% over the period.

Rather than indulging in gloom over statistics, the Co-operative Group commissioned London-based think-tank Demos to investigate who these young people are and how they perceive the situation they have been handed. The resulting report - Back to the Future - and the short film of the focus group participants offers considerable cheer. They are thoughtful, sincere and well-informed.

The outcome of the consultation is a call for a transfer of 'political capital' towards young people. The events were held in the week before the spending cuts were announced, yet none of the people there had been able to vote since they were 16 and 17. A lowering of the voting age to 16 is a long-overdue reform that was overlooked during the clamour for reform prior to the election.

Perhaps a more practical - and achievable - suggestion would be the transfer of assets, particularly in the form of land, to enable young people to take control of their lives. Proposals such as those for community self-build, if combined with appropriate sustainability and local provisioning targets, could enable the 'generation crunch' to become the ecological citizens who will create our sustainable future.
. Tweet
Posted by Molly at 08:12