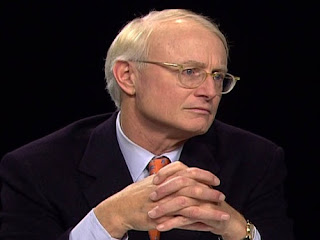 At the risk of giving Michael Porter greater publicity by posting a blog about him, I have decided to dedicate today's offering to his concept of 'shared value'. If you can spare your eardrums you can hear him discussing this with Peter Day on the latter's World of Business programme (20th January).

On one level this is extremely irritating. The very same Michael Porter, star of the Harvard Business School, scourge of fatty production systems, climate criminal extraordinary, has metamorphosed into a fluffy bunny, worried about fair shares. It is impossible not to be galled by this - and particularly by the fact that he makes arguments diametrically opposed to those he made a mere year or two ago with an equivalent amount of grating self-confidence. Here is Porter post-epiphany, writing in the Harvard Business Review:

'A big part of the problem lies with companies themselves, which remain trapped in an outdated, narrow approach to value creation. Focused on optimizing short-term financial performance, they overlook the greatest unmet needs in the market as well as broader influences on their long-term success. Why else would companies ignore the well-being of their customers, the depletion of natural resources vital to their businesses, the viability of suppliers, and the economic distress of the communities in which they produce and sell?'

But wasn't it this very sort of competition for value creation that Porter's theories of innovation and business strategy generated? How can he move on, without missing a beat, to become Robert Owen's blood brother? And how can we square this with Porter's arguments made in 1995,* where he suggested that there is no trade-off between economy and environment and that innovation can reduce the need for regulation:

'Our focus here is not on the social benefits of environmental regulation, but on the
private costs. Our argument is that whatever the level of social benefits, these costs are far higher than they need to be. The policy focus should, then, be on relaxing the tradeoff between competitiveness and the environment rather than accepting it as a given.'

Fundamentally, of course, Porter and his ilk have not changed their own strategies, which were always about control. Recognising that - in the midst of ecological and financial crisis - the game is up with this incarnation of capitalism, they are seeking to be in control of the next phase. Whether capitalism is adapting in essence or merely in rhetoric remains to be seen - and lies beyond the control of those not part of the Harvard Business elite.

*Porter, M. E., and Claas van der Linde. "Toward a New Conception of the Environment-Competitiveness Relationship." Journal of Economic Perspectives 9, no. 4 (fall 1995).
. Tweet
Posted by Molly at 10:18