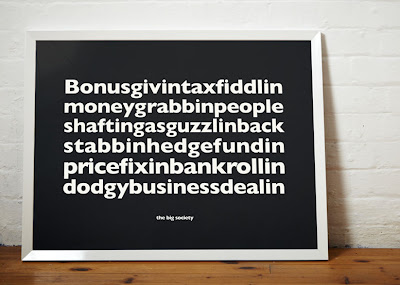 In patronising mediaspeak we are to be told again today that the PM is failing to communicate effectively his vision for the Big Society. While he may be failing in the sense that we, who must be the big society if anybody is, are not following his line of argument, he is not failing in the sense that we are well aware what he is up to. A ComRes poll reported in yesterday's Sunday Independent indicated that 41% of people considered that 'The Government’s Big Society is merely a cover for spending cuts' with only 21% disagreeing, while half of those surveyed thought it was just a gimmick.

What is important, and can cut like a sharp scalpel straight through the tendentious guff, is the simple issue of ownership and control. A co-operative is a different form of business because it is owned by either its workers, or its customers, or some combination of the two. The value of its business stays with them. And decisions about how the business should work also rest with the workers or members, either directly or - when the co-operatives reach a certain size - through elected boards.

The difficulty co-operatives, and social enterprises, have faced in a capitalist economy is persuading those who control capital to lend them the small amount they need to develop and expand. Overseas co-operative movements have identified this weakness and become effective at recycling their members money, as in the Quebecois solidarity funds, or the Caja Laboral in Spain. The putative Big Society Bank, by contrast, is a capitalist institution, where external holders of capital can make profits from the work of others. The contrast between this the co-operative approach is clear when the discussion moves seamlessly on to a Big Society Stock Exchange, indicating that ownership, too, will be vested not in those who create value in the business but in those who merely trade in its shares.

The important political question is why, when it is the private sector that has demonstrated itself to be socially destructive and ethically irresponsible, is the government focusing attention on 'reform' of the public sector. A policy to facilitate the transition of businesses into co-operatives might be a much more effective way of enlarging society, while simultaneously making 'business' more responsible for social need.

And while this is a highly unlikely policy to emerge from either a Labour or a Tory government (although it would be high up the agenda of a Green one), we should content ourselves with supporting and most importantly joining the co-operatives that already exist. While the media is focusing attention on the People's Supermarket, the efforts of this struggling, individual shop in central London are quite unnecessary. We already have a people's supermarket: it's called the Co-operative.
. Tweet
Posted by Molly at 08:06