Inspiration from the Emerald City 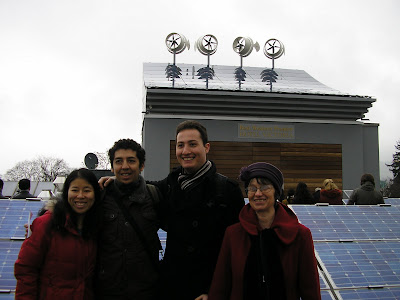 This short hiatus in posts can be explained by my recent very enjoyable trip to Freiburg, a Germany city close to the French and Swiss borders and the Black Forest. I was invited to speak to this year's Forum on Enviromental Governance, an event organised by the students of the University MSc in Environmental Governance.

Freiburg styles itself as the 'greenest city in the world' and was voted Germany's greenest city last year. Many of the design features - such as co-housing developments and local food markets - were familiar to me from Stroud. The difference was in terms of scale, and also of the commitment to inclusive ecological communities (such as the famous Solarsiedlung, or 'solar village') and the excellent public transport systems you expect in Germany. 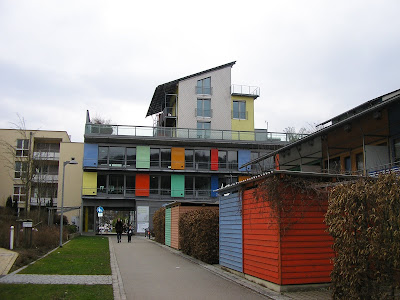 I had assumed that these developments would have grown up with the active support of the local authority, but it seems that even in Germany eco-activists have to lead the way. The famous Vauban development, where eco-homes powered by the sun have replaced a US army base, was privately funded and faced problems with planning permission at every stage.

During my visit I stayed at the Hotel Victoria, which claims to be the world's greenest. It uses no fossil fuels, relying on solar panels, four small wind turbines, and wood pellets from the local forest resource. The level of luxury in the hotel (and the expense) did make me question the concept of 'prosperity without growth'. I am fairly sure that the level of comfort enjoyed in the hotel is not possible for all the world's citizens.

Which brings me to the content of the conference itself. Like many who come to a first consideration of 'the green economy', the students had focused on technical and design aspects. The two first speakers were Ernst Ulrich von Weiszacker, he of Factor-4 and now Factor-5 fame. His claims that energy efficiency could solve the ecological-economic crunch were undermined by Ulrich Hoffman, head of sustainable development at UNCTAD, who quoted Tim Jackson's figure that a 128% increase in efficiency would be necessary to ensure a Western lifestyle to all the world's people, if we assume current population growth trends. 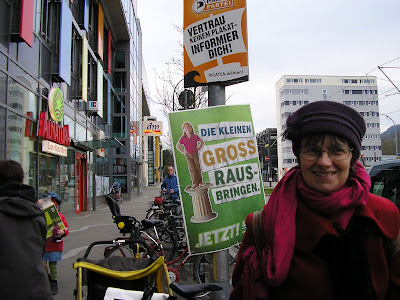 My own contribution was to raise the social, political and cultural questions around a green economy. The students were very interested in the Transition Towns, although they left little space to consider how we are to make changes to our consumption expectations if we are to make a deep green economy a reality. Overall it was a realy inspiring visit. The city itself is a wonderful model, but so is the university and its openness to genuine learning. The 19 MIG students, from 26 countries, will be sustainability leaders and we would benefit greatly in the UK from similar courses.
. Tweet
Posted by Molly at 09:07