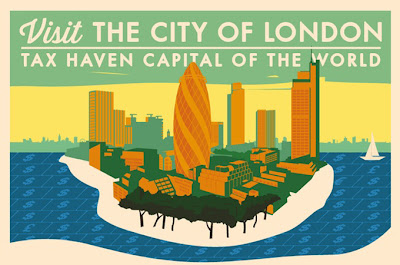 This question began forming itself in my mind last month when I heard a presentation from Lynne Oats, Professor of Taxation and Accounting at Exeter University, describe how difficult it would be to get a legal handle on the problem of corporate tax avoidance. She drew attention to the accelerating race to the bottom between countries in terms of their corporate tax rates. While to my mind this is not enough to constitute a tax haven, and I am not convinced that this is a technically impossible issue, it is interesting to note that UK corporation tax was reduced again in last week's budget.

But surely there is more to being a tax haven than having very low rates of tax? Doesn't it involve aspects such as not asking too many questions, or allowing companies what we might politely call a lack of transparency in their dealings? Here I think the UK might also score rather highly. Why else is Britain opposing the EU's proposal for a Financial Transactions Tax but for the fact that, in order to tax something, you have to measure it first? The rate is not finally determined but at the level of a fraction of a percent it cannot have bankers shivering in their shoes about the loss of asset value. But the advent of transparency is a different matter.

Which brings me to the issue of Cyprus, a country in our midst, in our very own single European market which is suddenly revealed as being a tax haven. This was not mentioned when Nicosia's communist government took over the leadership of the European Union?.It is only since the new government came into power that the big beasts of the Eurozone have decided to throw Cyprus to the wolves. Yet its problems started because of the Troika policy of fudging rather than solving Greece's bankruptcy. Given the close ties between Greece and Cyprus the haircuts led to massive losses for Cypriot banks. The cover stories about Russian billionnaires being funded by German taxpayers arise from the problems faced by Merkel in the forthcoming elections rather than any serious attempting at analysis or policy-making.

The bloggers as Naked Capitalism make a brave attempt to explain why Cyprus is not a tax haven, but for my money they are not making a very convincing job of it. So given that George Osborne has made it central to his policy to attract foreign investment and to keep the financial sector happy, and that he is deliberately and successively reducing our rates of corporation tax, how long will it be before we will be thinking of the UK as a tax haven?
. Tweet
Posted by Molly at 12:18