Why I am Not a Communist

Hell, I am not even a socialist and have never claimed to be. As a Green it is my firm opinion that we are part of a new ideology and one that my Green House colleague Andy Dobson has helpfully labelled 'ecologism'.

Since I am not a great fan of theory you may be wondering why I am setting out in this somewhat defensive way. The answer is that I am responding to an article in this morning's Guardian from the lovely Zoe Williams who has helpfully put the citizens' audit proposal in front of the nation's liberal readership while they enjoy their Saturday morning croissants. Zoe quite rightly suggests that we are in need of revolutionary changes to our economy and especially in the area of finance.

She begins with Ha-Joon Chang, the highly influential economist based in Cambridge, where you are still allowed to work without subscribing to the tents of neoclassicism. To his credit (and according to  Wikipedia) Chang has been an intellectual influence on Ecuador's President Correa, so he should be familiar with the idea of a citizens' audit and the suggestion that some of the debt we are carrying is odious and should not be repaid. But when Zoe put this question to him he responded by expressing concern about ideas that might result in one being labelled as a communist.

I have no such fear, which probably arises from the fact that I have never found communism appealing. My proposals have always included a strong element of private, community, and co-operative ownership that negates and dilutes the centralised ownership of productive capacity in communist regimes. I am still struggling with the reality of the fact that many people seem more highly motivated by individualist financial return than community benefit: have the learned this as children of capitalism, or were they born that way? 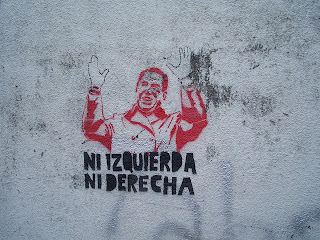 But it is the vision of the world as a a dichotomy between capitalism and communism that is most limiting, as though we had so little imagination that we could not think of countless other ways of organising our economic affairs. Not to mention the fact that it would be inaccurate to describe the global economic system of our contemporary world as capitalist. The last time I looked in my economics textbook capitalism was a system where a large number of companies competed in each market, with thrusting and innovative entrepreneurs rapidly entering to keep the competition fierce. The whole rationale for such a system, and the reason it is justified as superior, is to prevent the pattern of concentration of wealth and power in the hands of the few that we see around us.

So Zoe is right: we do need an economic revolution. We need to find the courage to challenge capitalism and replace it with a different vision of economic life. In Green Economics I offered my vision of an economy with social and ecological justice backed up by greater political involvement. With a patchwork of self-reliant and democratic local communities this is far from a communist vision, although it does raise urgent questions about the ownership and control of resources. In The Bioregional Economy I extend that vision to explore how it could help us to deepen our relationship with our local places and how this might offer an attractive substitute for the consumer culture.

It is exactly these sorts of alternative visions that the communist-capitalist dichotomy seeks to outlaw.  So if you really want an economic revolution it is time to emancipate yourself from mental slavery and start working out your own alternative.
. Tweet
Posted by Molly at 06:53