The results from the Luxembourg jury are in. Thanks to Green MEP Sven Giegold citizens across Europe have been feverishly reading up on the exotic financial products the City Boys have dreamed up over the past decade or two and comparing their toxic effects.

The winner in the category of 'products that harms consumers and investors' is the Credit Default Swap, proposed by financial policy adviser at Oxfam. In proposing this loser for a winner he wrote that:

'The root cause of the Eurozone debt crisis was government borrowing, which wasn't stopped despite an active sovereign Credit Default Swap market. The issue here is that once a government gets in trouble, a CDS market can mean there's no way out. The same applies for emerging market governments too. It's too small a benefit, for too big a risk, and there's a human impact that can't be ignored.'

The results for the category as a whole were:

In the category for products that harm the environment, the global poor and third parties the winner was Food Speculation Funds. This was proposed by German campaign group Geld mit Sinn, which focuses on financial education and enlightenment. Sadly its name does not mean 'Money with sin', which perhaps it should, but 'Money with sense' or 'Money with understanding'. Their nomination read:

'Products based on food speculation are dangerous because they cause price increases of basic food stuff. Hence these products threaten? livelihoods of low-income earners and can even result in the death of
those who cannot afford their food anymore.'

In this country the votes were cast as follows:

Sadly, our votes in this ballot are about as meaningful as in the Eurovision Song Contest. However, on our behalf Sven Giegold will join members of the jury and the authors of the winning proposals to meet the European Securities and Markets Authority (ESMA) in Paris. I am sure we all wish them well in speaking truth to power on our behalf. 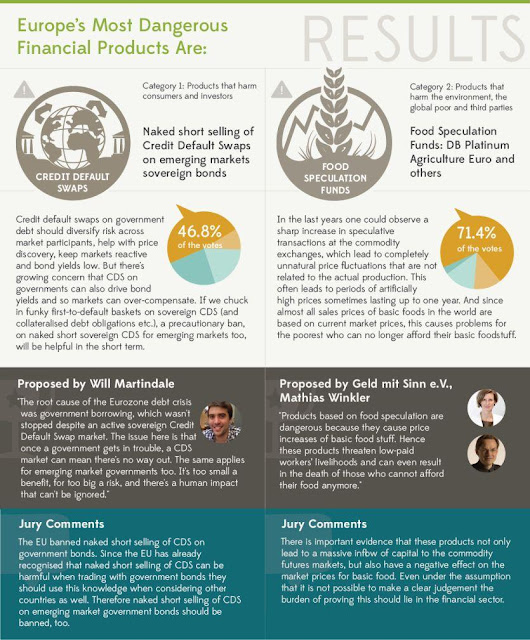