What is Going on in Cyprus? 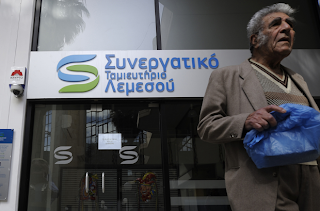 Why is the banktruptcy of a tiny economy in the Mediterranean making headlines across Europe? The answer is that the Cyprus solution is what every saver across Europe fears might be coming their way soon. The awareness that money is not real and that countries are not good for the amounts of money they have guaranteed has been creeping into people's consciousness over the past five years. I know this because I speak to large groups of people about money and this fear is lurking behind their questions about gold and their decisions to put money into renewable energy schemes or socks under the mattress.

It was this fear that drove Alastair Darling to increase the savings guarantee in Britain at the start of the financial crisis: nothing is worse for a banking system than people feeling that their deposits are not safe and withdrawing their money. And nothing spreads this fear as rapidly as governments taking money out of their citizens' bank accounts as the Cypriot government has threatend to do. When the Argentinian government made a similar move in 2001 it precipitated a massive withdrawl of capital and the collapse of the national economy.

I am pleased to see that, although the levy on Cypriots' bank accounts is a policy made in Germany and to please German tax-payers, the Green Group in the European parliament, alhough it is dominated by German MEPs has made its opposition clear. Greens/EFA co-president Dany Cohn-Bendit is quoted stating that:


'The attack on ordinary depositors in the context of Cyprus' bail-out is outrageous and must be urgently corrected. Small depositors should be last in the line of fire in any bank restructuring. This is the guiding logic behind EU legislation providing for national deposit guarantee schemes, as well as draft legislation currently under consideration on an EU deposit guarantee scheme. While the proposed depositors' levy may be legally consistent with the existing legislation, it is a cynical ploy, which totally defies the spirit of the rules and their raison d'être.'

Merkel's decision to crush a tiny and vulnerable economy comes less than a month after the 60th anniversary of the cancellation of Germany's own war debt. By 1953 Germany was still carrying pre-war debts which had been massively increased by the costs of borrowing to fund the war itself. The country was in ruins and was incapable of borrowing to rebuild. Germany's former enemies agreed that for the sake of peace and humanity a significant portion of its huge debts should be written off, sums amounting to a value equivalent to 75% of Germany's exports in 1950. The remaining debt was restructured and interest rates reduced.

The Dublin based Ango: Not Our Debt campaign celebrated the anniversary, which is passing unmentioned in Germany. Its spokesman Andy Storey commented:‘The 53 Accord was signed initially by 22 creditor countries, including by Ireland and Greece.' Anglo: Not Our Debt point out that the amount of debt cancellation received by Germany in 1953 in today’s terms is worth nearly €37bn., similar to the amount of the principal of Anglo debt being paid by people in Ireland over the next 40 years. Indeed, the amount of debt cancellation received by Germany is all the more impressive, as Germany’s economy was far smaller then than today
.