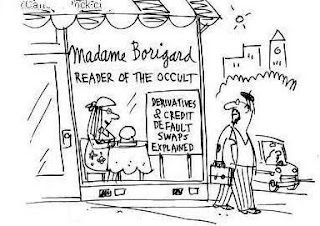 Following hard on the heels of the bankers' bonus cap the European Green Group are proposing further action to control the damage that the financial sector can do to the European economy. Sven Giegold, a Green MEP from Germany and member of the EU Commitee on Economic and Monetary Affairs has launched a public poll to identify the riskiest financial product, as a preliminary to a campaign to have it banned.

The proposals that have been suggested by citizens from across Europe give a glimpse of the socially destructive nature of modern banking. Many are complex forms of derivative, where the value to the 'investor' depends on one or more highly unpredictable events: such products are nothing more than gambling and should have no place in a properly regulated banking system. Others include vulture funds, where finance companies seek to profit from countries that have had to default on unpayable debts, or payday loans that charge punitive interest rates and force those on low incomes into debt. In the European context some of the most dangerous activities of banks have been to encourage EU citizens to take out mortgages in foreign currencies; as exchange rates have varied they have found the repayments impossible to pay and have lost their homes.

This is not simply a poll. Since its establishment in 2011 the European Supervisory Authorities with responsibility for banks, investments and insurance products has the power to prohibit products that threaten the vitality of the European economy or society. This power has already been used to ban naked short-selling but the Greens are now increasing pressure to have the powers used more widely. Once we have chosen the most dangerous product a campaign will begin to lobby for this regulation to be used to protect us from one aspect of financial degradation.

The financial products chosen offer a number of risks. Some threaten the integrity of the financial system by introducing high-level and large-scale risk to the banking sector. Others, such as those facilitating in land and food prices,  destroy the  livelihoods of the poorest people in the world. Use your opportunity to fight back against the socially destructive finance industry by voting in the European Green Group ballot - and learn something about the appalling behaviour of the finance sector along the way. Voting remains open until 14 March
. Tweet
Posted by Molly at 08:14