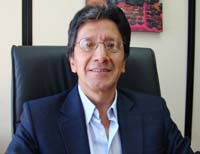 I first heard of the exciting developments in the Ecuadorian economy through my investigations of the proposal for a citizens' audit and debt repudiation. Ecuador was the first country to reject the debts that the Correa government inherited from the previous regime it replaced in 2005. But this was just the first step in a process of reorganising the economy so that it serves the interests of the people rather than those of the market and profit.

This was the proposal of Milton Maya, Assessor in the Ministry for the Co-ordination of Political Economy. The very existence of such a ministry suggests the leadership that this small Andean nation of 15 million people is showing global leadership in response to the depredations of the globalised capitalist economy. He considers the task of economic policy to be to construct a more humane and just society to counter neoliberalism. On a global basis he identifies a rapid decline in the output of the productive economy matched by a growth in the speculative financial economy: 'speculation has overtaken production'. This requires a new economic model to prevent the use of finance to extract value from the productive economy, leading to greater inequality and economic crisis. In Ecudaor the objectives of economic policy-making are:

Maya argued that constructing a more humane and just society to counter neoliberalism is a political duty. He identifies across the world a rapid decline in the output of the productive economy matched by a growth in the speculative financial economy: 'speculation has overtaken production'. In some respects the Ecuadorian economy is still highly production: sales from smallholdings represents 25.7% of GDP and 10% of net total income. The economy is focused on meeting human need not on generating profit and not directed towards the market. This is a social and solidarity economy under the Plan Nacional para el Buen Vivir. Ley Organica de Economia Popular y Solidaria y del Sector Financiero Popular y Solidario (LOEPS). To support this vision the government has invested $27.9m between 2009 and 2011 in co-operatives and $51.5m in total in the whole social economy.
.
Tweet
Posted by Molly at 11:02